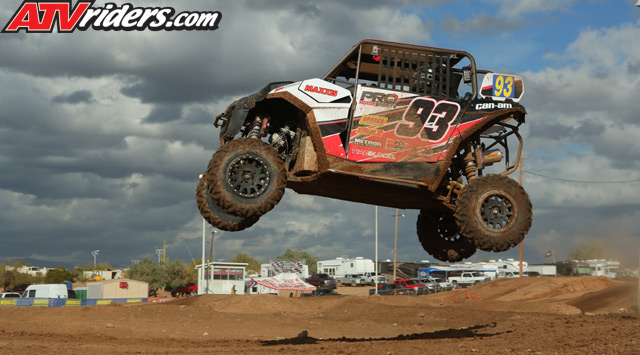 Peoria, AZ – Nelson and Nelson’s Mitch Guthrie charged his way to the top of the Pro SxS podium at round three of the 2015 Rocky Mountain MC World Off-Road Championship Series Presented by Maxxis and Dirt Wheels with H&M Motorsports’ David Haagsma in second and Ryan Piplic in third while Ray Bulloch claimed the Pro Stock SxS win.

While RJ Anderson was busy grabbing the holeshot, Mitch Guthrie Jr was starting on the second row. Guthrie Jr, who was aboard his new Nelson and Nelson built Polaris RZR, quickly began picking off the competition and had moved into the top five by the second lap. “The start was gnarly, but my Muzzy’s engine really pulled hard to grab the holeshot,” said Guthrie Jr.

Walker Evan’s Mitch Guthrie Jr kept a fast pace and soon closed the gap to within a minute of David Haagsma, who held the physical overall lead after making the pass on RJ Anderson, but Guthrie Jr had the clock on his side to claim his first Pro SxS win of the season.

Maxxis/H&M Motorsports’ David Haagsma was inside the top five off the start and soon closed in on the leader, RJ Anderson. Haagsma stayed close and inherited the lead when Anderson encountered issues and was forced to pit. Haagsma kept a steady pace while in the lead, but hadn’t realized that Mitch Guthrie Jr had taken over the lead with adjusted time from row two.

FOX’s Ryan Piplic got off to a great start in the number two spot and was holding steady for the first two laps despite breaking his rear differential in the first lap.

Polaris/Walker Evan’s RJ Anderson had grabbed the holeshot in the Pro SxS class, but he was forced into the pits with a flat tire. Unfortunately, Anderson’s RZR fell off the jack during his pit stop, which caused him to lose even more time. Anderson was able to get back on the course, but he was only able to make his way back up to a fifth place finish.

In the SxS Stock Pro class, Triple S Polaris’ Ray Bulloch charged his way from the second row start to claim the class win with adjusted time. “I started on the second row and it was kind of brutal. The rain really helped a lot and kept the dust down and made it a good race. The track got rough but we pulled off the win and we couldn’t be happier. I really have to thank Jeff Obering for helping me out and Triple S Polaris and Lucas Oil. I feel really good and confident going into the next round and hopefully we can get into the points championship from here,” said Bulloch.

GMZ’s Jacob Shaw, who just came off the win in the UTV World Championships, had his fair share of issues off the start in the Stock Pro class when his machine went into limp mode. Shaw was able to restart his machine and charged his way up to a second place finish in the SxS Pro Stock.

Robert Olander originally was awarded the final podium spot, but it was later determined he finished in seventh place with adjusted time, and actually LSR Racing’s Branden Sims claimed the final spot on the podium.

In the SxS Unlimited class, Mitch Guthrie Jr claimed his second win of the day as he finished with a time of 46:16.069. “The Unlimited race went awesome. I grabbed the holeshot and stayed out front the whole time. We are going to be racing our old car in the Unlimited class and the new car in the Pro class. I am pretty stoked to get two wins this weekend. You really can’t get any better than that,” said Guthrie Jr.

Can-Am/Pro Motorsports’ Matt Hancock was looking good and challenged Guthrie for the lead, but could not make a pass and settled for a second place finish in his new Can-Am Maverick Turbo. “My Maxxis tires hooked up great. It was brutal out there and I am happy with taking second,” said Hancock.

Walker Evan’s Matt Gardner claimed his third win in the SxS 1000 Stock class and holds a commanding points lead in his class. “It didn’t come easy today. There was a lot of competition out there but I am really stoked to take another win,” said Gardner.

In the Powder Puff class, Danielle Weatherly claimed her second straight win. “I’m so excited! I had to work hard. The course was rough but it was a lot of fun and I am so happy to get another win,” said Weatherly. Jennifer Broughton held on for a second place finish in the Powder Puff class while Jamie Piplic finished in third.

Round number four of the 2015 Rocky Mountain MC World Off-Road Championship Series Presented by Maxxis and Dirt Wheels will head to Lake Havasu, AZ, on March 27-29th, which is a favorite destination for many racers and will be incredibly exciting as the points chase heats up in the desert south west.