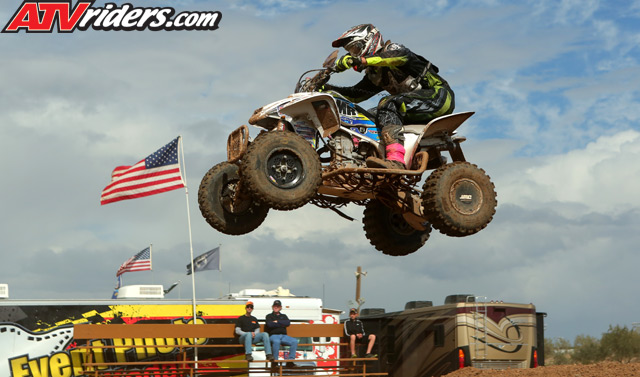 Peoria, AZ – Maxxis/H&M Motorsports’ Beau Baron continued his onslaught in the Pro ATV class at round three of the 2015 Rocky Mountain MC World Off-Road Championship Series Presented by Maxxis and Dirt Wheels with his third consecutive win, while his teammate David Haagsma joined him on the podium in second and LMR Racing’s Robbie Mitchell claimed third.

H&M Motorsports’ Beau Baron dominated the Pro ATV class since the season opener in January and this round was no different. Baron was in the number two spot behind his teammate, David Haagsma after just a couple of turns off the start and stayed close, waiting for an opportunity to get by. Baron got his way in the second lap and took over the lead. Once out front he never looked back and took a commanding win.

H&M Motorsports’ David Haagsma grabbed the holeshot with his teammate Beau Baron was hot on his heels. Haagsma held off Baron until lap two and then fell back to second. Haagsma stayed close, recording the fastest lap time of the race in lap eight with a time of 09.20.690 and closed in to within 9 seconds of Baron, but he was unable to get close enough to make a move and settled for a second place finish.

EXIT Shock’s Robbie Mitchell was in second off the start but fell back to fourth early in the race. Mitchell rode a steady pace in the number four spot for several laps before overtaking Garrin Fuller and claiming third place for his third straight Pro ATV podium finish to kick off the year.

Duncan Racing’s Garrin Fuller got a good start and was able to move into the second spot late in the race after passing Haagsma while he was briefly sidelined dealing with a cactus, but Fuller would spend most of his race battling with Mitchell, and at the checkered flag, Fuller claimed the fourth spot.

Pro Motorsports’ Jeff Hancock, Matt Hancock’s big brother, decided to throw a leg over a quad in the WORCS series for the first time in years, and did fairly well as he rounded out the top five.

In the Pro-am ATV class, Mike Sloan has been unstoppable and he has so far had a perfect season, winning all of his races in the Pro-am class as well as the Open A class. For round three, Sloan was second off the start and took over the lead in the second lap. Sloan looked fast and smooth and recorded the fastest lap time of his class with a time of 09:58.688 in the third lap. His incredible speed carried his to his third Pro-am win of the season.

JRi/Lonestar Racing’s David Flores was in fifth off the start and moved into fourth place early in the race. Flores made a hard charge and worked his way up for a second place finish, just 19 seconds behind Mike Sloan. Ryan Waldo had a good start and held on for a solid third place finish.

Pro Motorsports’ Matt Hancock, who grabbed the early lead, had not been feeling well and fell back for a fourth place finish while Joseph Shafe rounded out the top five in the Pro-am ATV class.

Round four of the 2015 Rocky Mountain MC World Off-Road Championship Series Presented by Maxxis and Dirt Wheels will head to Lake Havasu, AZ on March 27-29th where Beau Baron and Mike Sloan will be looking to continue their winning streaks.