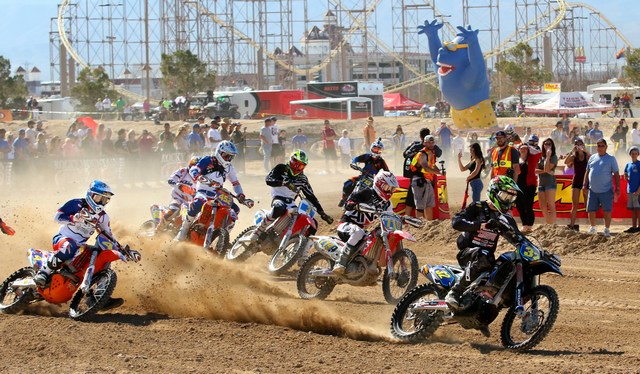 (Primm, NV) – The man in black, Robby Bell, secured his second straight win of the 2015 Rocky Mountain MC World Off-Road Championship Series presented by Maxxis and Dirt Bike.  One again, the reigning WORCS Champion, Gary Sutherlin, finished in the second spot, and Justin Seeds claimed the final spot on the podium at the Buffalo Bill’s.

For round two of the WORCS series, the Pro Motorcycles and Pro ATV racers started together, but they raced partially on their own course that merged back to together for the last few miles before splitting up again after scoring.  Unlike the foggy season opener, there wasn’t a cloud in the sky for the high noon start at Buffalo Bill’s and temperatures soared to over eighty degrees, which made it feel more like spring than winter.

Conditions were perfect for Precision Concept’s Robby Bell as he fired up is Kawasaki on the first kick for the dead engine start to grab the holeshot. Once Bell was able to pull away from Yorba, he was able to run his own race with a commanding lead over Sutherlin in the final laps of the high speed course.

With two straight wins, Bell is off to his best start to a WORCS season as he looks to regain the number one plate. “This year, the biggest thing for me was coming into the season healthy, and I’ve started off with two wins. It’s allowed me to ride more to my potential, and it’s been really fun so far, and hopefully I can keep that momentum as well with the win streak,” said Bell.

KTM’s Gary Sutherlin had to work his way past several racers before he moved into the second spot at the midway point of the race, but he was never able to reel in Bell to challenge him for the lead. For Sutherlin, it was the second time he finished in the runners up position, so Sutherlin will be looking to break his streak at round three.

Hinson / Honda’s Justin Jones ran another impressive race and even worked his way up into the second spot heading into the final hour of the race, but he lost a few spots in the second half of the race, which kept him off the podium with a fourth place finish.

In the Pro 2 class, Dalton Shirey secured a dominant win as he grabbed the early lead and pulled the fastest lap time in the class, and by the checkered flag, he was nearly three minutes ahead of the second place finisher, Starr Savage.   Round one winner, Michael Del Fante, wasn’t able to get his motorcycle started on the line and struggled early on in the race before mounting a charge to claim the final spot on the Pro 2 podium.

In the Pro 2 Lites class, Mitch Anderson claimed the win for his second straight podium finish, which boosted him into the points.  Noah Kepple finished in the second spot, and Brady Hoover rounded out Pro 2 Lites class podium.