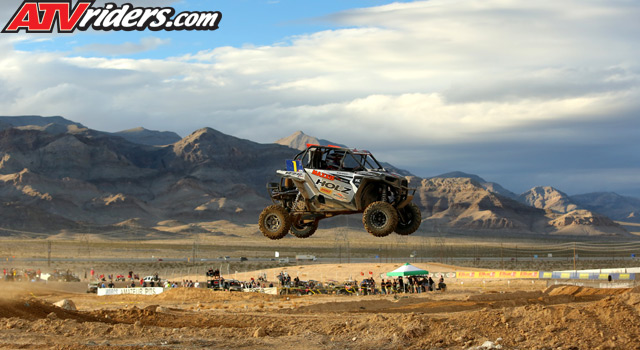 Buffalo Bills Casino & Resort hosted the action for the second round of the 2015 WORCS racing season, which saw a record number of 105 total SxS / UTV entries on the weekend. Track conditions were good and included plenty of desert style terrain along with a motocross section and the fan favorite, road crossing jump.

At round one of the series, several of the Pro SxS racers signed up to race in some of the amateur classes in order to get in some extra seat time. But many thought it was not fair to the amateur racers in those classes who were going for points championships to be up against a pro, so in order to keep things fair, WORCS officials have limited pros to only racing in the SxS unlimited class for some extra seat time before the Pro SxS Race. Also, all the pros were rescored in the SxS Unlimited class from round one, so they could still be in the running for the SxS Unlimited championship in addition the SxS Pro class Championship, which kept everyone happy.

Weather conditions were near perfect for the start on Saturday’s WORCS SxS races, and H&M motorsports’ David Haagsma grabbed the holeshot from the front row of the Pro SxS class with his teammate Beau Baron close behind. Haagsma fended off several attempts from Baron and went on to take his first SxS Pro win of the season, putting him in the points lead.

Nelson & Nelson’s Mitch Guthrie Jr took on the Pro class and had great results. Guthrie Jr started on the second row and was running strong. Guthrie Jr made several passes and soon made his way to second place, but wasn’t able to close the gap on the Haagsma out front.

H&M Motorsports’ Beau Baron had a good start in third place and passed Ryan Piplic quickly. Baron ran down his teammate, David Haagsma and immediately began to apply the pressure until he flipped over a in turn, but Baron was able to flip his RZR back over and keep going. Baron was able to work back up to third for a podium finish.

HCR Racing’s Jeff Obering was looking strong as he charged off the first row in the top five, and he worked his way up into the fourth spot by the checkered flag.

Mystik Lubricant’s Mickey Thomas braved the rough course and was able to round out the top five, which was a major boost for Thomas heading to the next round.

Can-Am’s Matt Hancock was almost dead last off the start but worked his way up for a sixth place finish while Tim Wyatt finished in seventh. Keith Johnson came across the finish line in eighth place and Nick Thompson, who was running in fourth, broke a tire off in the final lap; finishing ninth. Ryan Piplic also encountered issues and rounded out the top ten in the SxS Pro class.

In the SxS Pro Stock class, Codey Rowley charged his way to the win. Rowley claimed second at round one and showed it was no fluke. Rowley was the only racer in the Pro Stock class to take on a huge double on the infield, but that gave him the edge he needed.

Walker Evans Racing’s Mitch Guthrie Jr put in a hard charge from a second row start but a brake issue early in the race caused him to fall back briefly. Once Guthrie Jr was back on track, he powered his way through traffic and claimed a respectable second place finish.

Can-Am’s David Martinez charged his way to a third place finish in the SxS Unlimited class. Martinez was in the top five for the first couple of laps and kept a good lead ahead of sixth place. Martinez pushed hard and crossed the finish line in third place.

In the SxS Powderpuff class, Danielle Weatherly took the win. “The track was a little bit rough but it was a lot of fun out there. We are going to run the whole series so we are hoping for more wins,” said Weatherly. Savannah Brooks claimed a close second place, finishing just over 30 seconds behind Weatherly and Christy McGuffin rounded out the top three.

Round three of the 2015 Rocky Mountain MC World Off-Road Championship Series presented by Maxxis and Dirtwheels will head to Canyon MX in Peoria, AZ on February 27-March 1, where the competition will be heating up as David Haagsma will be defending his points lead in the Pro SxS class.