Beau Baron Takes the Pro ATV Win at Round One

Posted on January 18, 2015 by Podium Promotions Leave a comment 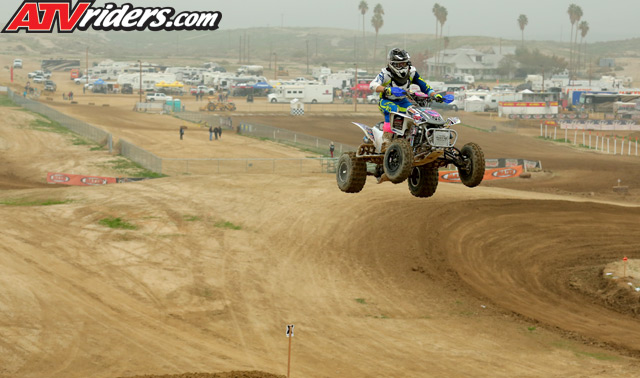 Taft, CA – Defending Pro ATV champion, H&M Motorsports’ Beau Baron claimed the win at Honolulu Hills MX at round one of the 2015 Rocky Mountain ATV MC WORCS series Presented by Maxxis and DirtWheels Magazine and was joined on the podium by teammate David Haagsma in second and Robbie Mitchell in third.

Foggy conditions that were present for the SxS classes on Saturday had cleared a bit by Sunday afternoon, just in time for the Pro and Pro-am ATV races. Visibility was good and dust wasn’t an issue unlike last year, making for great racing conditions for the first round of the 2015 WORCS series.

When the flag dropped it was H&M Motorsports’ David Haagsma who was first off the line and grabbed the holeshot, but his teammate Beau Baron was hot on his heels. Baron stayed close, pressuring Haagsma for the entire first half of the race. Finally, Baron made his move and took the lead. “David was going so fast that it was hard to get around because of all the roost. I took a chance on a downhill and took the outside line for the lead right before stopping in the pits,” said Baron.

Haagsma was able to take back the lead for a brief time when Baron stopped for fuel, but Baron was able to reclaim the lead the following lap and hold ito to the checkered flag for the WORCS season opener win in the Pro ATV class

David Haagsma was on a mission off the starting line and managed to hold off Beau Baron for half of the race, but Haagsma finished the day in the second spot after a great race with Baron.

LMR Racing’s Robbie Mitchell, who was injured in the off season, was looking good as he came off the start in the number three spot right behind Haagsma and Baron.  Mitchell stayed consistent and ran fast lap times for the entire race and claimed the final spot on the Pro ATV podium.

417 Motorsports’ Josh Row was in the number four spot off the start and held his position from start to finish.

Duncan Racing’s Garrin Fuller rounded out the top five in the Pro class.

In the Pro-am class, defending champion, STI’s Mike Sloan had a great race despite having to swap all of his components to a new quad the night before the race. Sloan took an early lead and was being pressured by David Flores, but Flores ended up losing a front sprocket, which allowed Sloan to check out and take the win. “I didn’t worry about what was behind me. I just focused on what was in front of me so I just kept pushing. I really have to thank Duncan Racing, Roll design, Elka and all of my sponsors for this year, for stepping up and helping me win,” said Sloan.

Pro Motorsports’ Matt Hancock grabbed the holeshot, but fell back to the number three spot close behind Sloan and Flores in the first lap. Hancock stayed close and inherited the number two spot when Flores pulled off with sprocket issues and held his spot all the way to the checkered flag.  Number 203, Auston Baxter, seemed to come out of nowhere and claimed the final spot on the Pro-am podium.

Round number two of the 2015 Rocky Mountain ATV MC WORCS series Presented by Maxxis and DirtWheels Magazine will head to Buffalo Bills in Primm, NV on February 6-8, where Beau Baron will be looking to extend his points lead with another win if he can hold off David Haagsma and Robbie Mitchell, who are also in the hunt to top the Pro Podium and take home a championship.