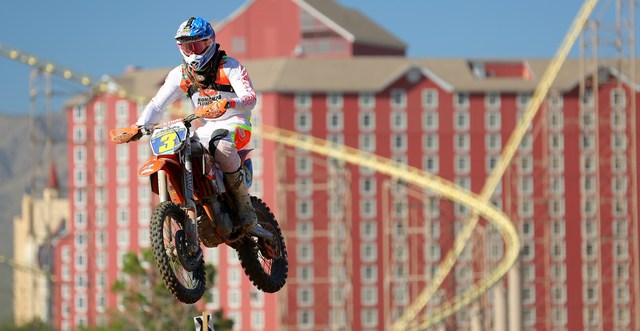 For Sutherlin, this was a dream come true because just eight years ago he was the star mechanic for the 2006 WORCS Pro Champion, Rick Dietrich, who edged out Bobby Garrison by just one point in the championship race, so for Sutherlin to go from mechanic to WORCS Pro Champion was a huge accomplishment.

Now with the WORCS number one plate, Sutherlin is headed to Argentina to compete in the ISDE along with fellow WORCS racers Justin Jones and Travis Coy, so his year of racing is far from over, and he plans on coming back in 2015 to defend his WORCS title.

As for the 2014 WORCS champion, Robby Bell, his season didn’t goes as planned with a season of ups and downs, but he came on strong at the season finale to secure this second win of the season.

RPM / KTM’s Justin Jones charged his way into the early lead and lead for the first half of the race before Bell was able to make the pass for the lead stick. Jones settled into the second spot and held to the checkered to match his pro career best finish, which he got at the 2014 WORCS season opener.

It took him all season, but the WORCS Pro Rookie, Eric Yorba, finally earned himself a spot on the Pro podium, and he did in style wearing a pink superman cape in honor of breast cancer awareness month.

The WORCS Pro 2 Champion, Travis Coy, made the jump up to the Pro Class for the season finale, and he finished in the fifth spot behind Sutherlin, which was an impressive finish for the pro rookie.

In the Pro 2 Class, John Burr Cycles’ Steve Gibson secured his third win of the season and finished an impressive fifth overall at the season finale. Brandon Prieto secured the second spot on the podium in the Pro 2 class followed by Erik King.

In the Women’s Pro, Tatum Sik, made her return from injury to secure his first win of the season after missing four rounds of racing, and she is looking forward to next season.  The 2014 Women’s Pro Champion, Brandy Richards finished in the second spot followed by Britney Gallegos.

With the 2014 Rocky Mountain MC World Off-Road Championship Series presented by Motoworks and Dirt Bike Magazine in the history books, the WORCS racers will just a short three month break before the 2015 season opener at Honolulu Hills in Taft, California on January 16-18th.