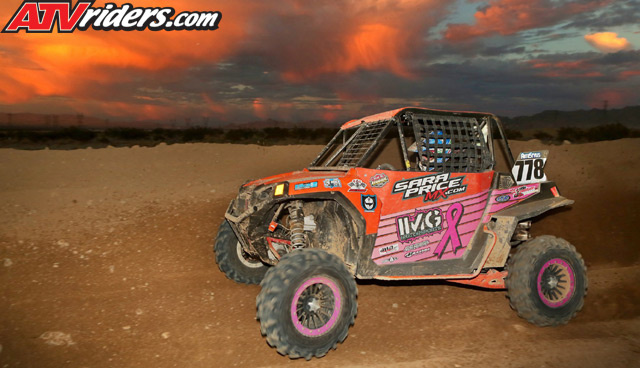 Off the start, Ryan Piplic got a bit of a surprise when he flipped his RZR off the start. Luckily, Piplic landed right side up and started charging his way through traffic. There was plenty of carnage throughout the course of the race, which helped Piplic work his way back to the front and take the win.

Nick Thompson charged his way to his second podium finish of the year as he claimed second on the Pro SXS podium. Thompson had a good start and was running in fourth for the first couple of laps before he able to move into second place in the final two laps and take it to the checkered flag.

Jeff Obering was in the number five spot early in the race and was able to work his way up to third and was chasing down Nick Thompson.

Once again there was a Powder Puff class for all the women who wanted to race and the turnout was even larger than the first race.  Sara Price, who finished second at the last race, took the win for the final round of the season, while Angela Olander claimed second and Christy McGruffin finished in third. Jamie Piplic had a good race and finished in fourth and Donna Ellsworth rounded out the top five.

Congratulations to all of the 2014 Rocky Mountain MC World Off-Road Championship Series presented by Motoworks and Dirt Wheels Magazine SxS champions. Next year will bring even more competition and kicks off on January 16-18th at Honolulu Hills in Taft, CA.