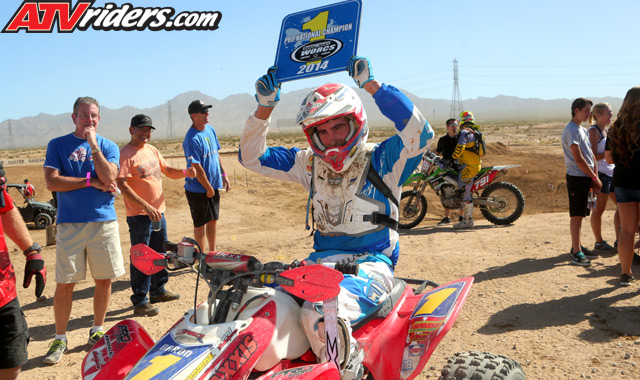 Buffalo Bill’s played host for the final round of the 2014 WORCS series and saw good weather and a sandy course that did get pretty rough throughout the day. Both the bikes and the quads were on the course at the same time for this race with the quads starting just behind the bikes.

H&M Motorsports’ David Haagsma was in top form and had a great start and held off the competition to take home the final win of the season. Haagsma had a boost of confidence heading into the final round after taking a big win at the ATV Pro Challenge last weekend.

Can-Am’s Dillon Zimmerman, who has been out for most of the season after an injury at Cedar City, was looking quite strong as he charged his way to a second place finish.

H&M Motorsports’ Beau Baron was on a mission for the final round. Baron was determined to win and it looked as if he might pull it off. Baron was battling back and forth with his teammate in the final rounds, but Baron ended up hitting a rock and stalling out. He was unable to get his quad re-fired and fell back to third, where he would finish the race. Luckily, all Baron needed to do was finish the race in order to wrap up the 2014 WORCS Pro ATV Championship.

Yamaha’s Dustin Nelson was looking good off the start and running out front, but a crash early in the race took the wind out of his sail, but he didn’t give up and charged his way back to a fourth place finish.

Josh Row was in mid pack off the start and worked his way up to third, but the rough track took its toll and Row fell off the pace a bit. Row hung on and rounded out the top five at the finish line.

Robbie Mitchell was on fire off the start as he grabbed the holeshot and was leading. Unfortunately, Mitchell had some bad luck and got two flat tires. To add insult to injury, the lugs on his wheels were over tightened and took some time to get them off in the pits, which set him back even further. Mitchell went back out and did his best and was able to claim a sixth place finish.

In the Pro-am class, David Flores charged his way to the top of the podium to win the final round of the season. It was a great way to end the season. This is actually the first time this season that I have felt relaxed out there. I had a good start and I just kind of road my own race out there. Dillon Zimmerman was helping me out getting everything set up and I really appreciated that. My Goldspeed tires were hooking up really good even in the sand. Mike Sloan and I were going back and forth and we had a good run, but I was able to pull away and had a good lead on him, and I was able to take the win,” said Flores.

Mike Sloan grabbed the holeshot and was leading for the first few laps, but fell back to second after a battle with David Flores. Sloan was staying close and looked as if he would finish on the podium, but he encountered issues late in the race, but was able to hold onto the 2014 Pro-am championship by just one point over Matthew Hancock.

Congratulations go out to the 2014 Rocky Mountain MC World Off-Road Championship Series presented by Motoworks and Dirt Wheels Magazine champions and hope to see everyone return in 2015, where the first round of the series will be held on January 16-18th at Honolulu Hills in Taft, CA.