Posted on September 14, 2014 by Podium Promotions Leave a comment 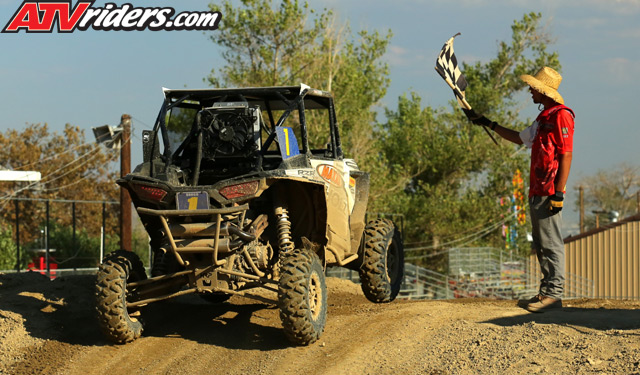 San Bernardino, CA – H&M Motorsports’ Beau Baron once again dominated the SXS Pro class at round eight of the 2014 Rocky Mountain MC World Off-Road Championship Series Presented by Motoworks and Dirt Wheels and not only took the class win, but Baron clenched the championship while his teammate David Haagsma claimed the win in the SXS 1000 class and Kayla Smith claimed victory in the Powder Puff class.

The temperature soared to the 110 degree mark at Glen Helen Raceway for the eighth round of the 2014 WORCS series. Track conditions were dry and as usual, the sandy course became very rough over the course of the day.


For the Pro SXS class, H&M Motorsports’ Beau Baron was looking for the win in order to seal the points championship. There were three rows for the pro class and Beau Baron was on the front row for the start. Mitch Guthrie grabbed the holeshot with Baron in close pursuit. Baron rode a smart race and stayed close for the first couple of laps, which worked to his advantage as Guthrie encountered a rear end issue and Baron made the pass for the lead

Once Baron took over the lead, there was no stopping him as he cruised to the win and the 2014 championship. “I knew I had to beat Mitch Guthrie today to take the championship, so I just tried to ride smart and finish well. It was a big deal for me to win. The SXS classes are getting tougher each year with a lot more competitors. I have been doing a lot of my own maintenance this year, so I am really stoked to take this championship not only for myself but also for my sponsors,” said Baron.

RJ Anderson has been a tough competitor all season and this round was no exception for him as he charged his way to the number two spot on the SXS Pro podium.

Pablo Veglia was able to take his Can-Am Maverick to the podium for the first time this season with a third place finish.

In the SXS 1000 class H&M Motorsports’ David Haagsma charged his way to the top of the podium for his fourth win of the season, and giving him a 9 point advantage over Matt Hancock. Haagsma didn’t get the start he was looking for and had to fight his way through traffic. Haagsma soon caught the leader, Matt Hancock and stayed close and was soon able to take over the lead when Hancock encountered mechanical issues.Once in the lead, Haagsma was unchallenged and took the win by almost a minute over the competition.

In the SXS 850 class, Danny Rosenzweig continued to dominate, taking another win aboard his John Deere UTV. Rosenzweig has almost a 30 point lead over his nearest competitor and is celebrating his class championship.

In the SXS Unlimited class, Yamaha’s Dustin Nelson raced for the first time this season aboard his SR1 Yamaha and put in an incredible charge, taking the win by over five mounted ahead of his competition.

For the first time ever, the WORCS series hosted the first Women’s Powder Puff SXS race. Jamie Piplic, wife of Ryan Piplic, spear headed the effort to get a women’s SXS race into the series and it was a huge success with 17 entries. The Women’s class ran a shortened course, but the competition was amazing and everyone had a great time.

Kayla Smith jumped out to the early lead and never looked back as she charged around the track in her highly modified Polaris RZR to take the win.

The final round of the 2014 Rocky Mountain MC World Off-Road Championship Series Presented by Motoworks and Dirt Wheels will head to Primm, NV on October 17-19 at the legendary Buffalo Bill’s Casino and Resort where the battles will be fierce as the final points will be determined.