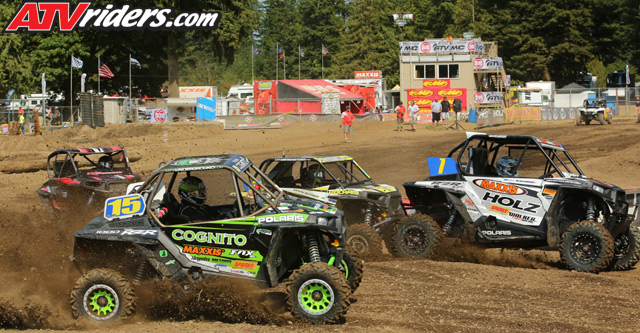 Straddleline ORV Park in Washington State, offered up new challenges for the SxS classes, where trees and tight technical trails meant passing could be difficult and a good start would be a crucial part to a good finish.


In the SxS Pro class, H&M Motorsports’ Beau Baron proved that to be very correct. Baron grabbed the holeshot and began to pull away, but late in the race, lap traffic became an issue and allowed Ryan Piplic to close in during the final two laps. Baron was able to hold off Piplic’s advances and take home the SxS Pro win.

Cognito Racing’s Ryan Piplic has been a strong contender all season and was able to take his SxS to the podium for the fourth time this season with a second place finish after an early battle with Mitch Guthrie Jr for the second spot.

Walker Evans Racing’s Mitch Guthrie Jr was second off the start and was quickly under fire from Ryan Piplic. Guthrie was holding strong, but fell back to third in lap three, which is where he stayed to the checkered flag for a podium finish.

In the SxS 1000 class, Pro Motorsports’ Matt Hancock came out on top. Hancock grabbed the holeshot and never looked back.

Keith Johnson was third off the start and charged his way to second at the midway point of the race. Johnson held his position despite pressure from Casey Wallace and claimed second on the SxS 1000 podium, leaving Casey Wallace to round out the top three.

There was a bit of friendly rivalry going on in the SxS Youth 200 stock class as Beau Baron’s daughter, Bailey Baron, went up against Sean Reddish’s son, Luke Reddish. Both pint sized racers gave it their all, but Bailey Baron was able to take the win, while Luke Reddish placed second.

In the SxS 850 class, Danny Rosenzweig put his John Deere SxS in the number one spot again. Rosenzweig has a 20 point lead over second place and looks as if he could give John Deere the SxS racing championship.

Round number eight of the 2014 WORCS series will head to Glen Helen in Devore, CA on September 12-14 where points battles will be heating up with only two rounds left in the season.