Gary Sutherlin Back on Top at Straddleline WORCS 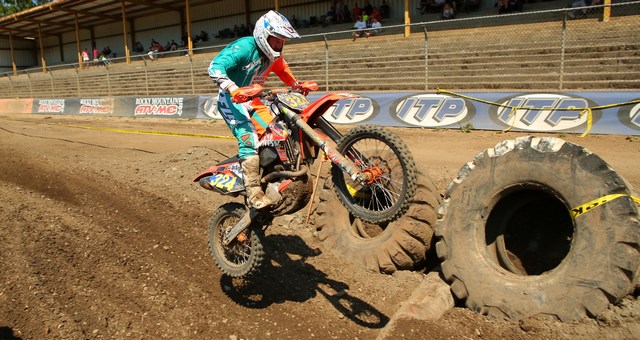 McCeary, WA – Gary Sutherlin returns to the top of the box by claiming his fifth win of the season at round seven of the 2014 Rocky Mountain MC World Off-Road Championship Series presented by Motoworks and Dirt Bike Magazine.   Yamaha’s Ricky Russell claimed the second spot followed by Rory Sullivan on the KTM.

For round seven, the WORCS series headed to the Straddleline ORV Park in Washington State for the first time since 2010.  Unlike the high speed tracks in the desert southwest, the northwest track presented some new challenges to the racers with trees and more trees with some tight and technical single track woods sections along with plenty of rocks and roots to keep the racers on the edge.  In addition, the most challenging endurocross section on the season was added into the mix with tires, logs, concert blocks, pot holes, and more, which attracted a large crowd of spectators out to watch the racing action from the trackside grand stands.

Once again, WORCS racers were greeted to near perfect race conditions, which attracted the largest pro turnout of the season with fourteen pros on the front line battling for the win.  Nine of the new pros to the lineup were all from Pacific North West, which gave them an advantage having some experience racing in the trees, and it showed on the podium.

John Burr Cycle’s Justin Seeds grabbed the holeshot, but he eventually settled into the fourth spot before he had a mechanical issue, which took him out of the race and off the podium for the first time in three rounds.

After just one lap of racing, Gary Sutherlin and Ricky Russell had already gapped the field by nearly thirty seconds as they battled each other for the lead and pulled away from the rest of the pack with the pair swapping the lead back and forth several times during the race, but Sutherlin was able to make the last lap pass on Russell just before the checkered flag to take his fifth.

For Sutherlin, it was a huge win after finishing seventh at the last round, and the win extends his points lead to eighteen points over reigning champion, Robby Bell, heading into the final two rounds of the season.

Yamaha’s Ricky Russell made an impressive 2014 WORCS Pro debut by taking the second spot on the podium, but he was right at home in the trees with the round seven within a few hours of his home in Washington State, and Russell is also races fulltime in the GNCC series where he is currently battling for the Pro2 Lites Championships, and his experience in the trees showed as he battled with Sutherlin for the win, which came down the turns of the final lap.

Claiming the final spot on the WORCS Pro podium was Rory Sullivan from Oregon.  Sullivan got off to a near last place start, but by the third lap, he worked his way up to third place, which is where he stayed for the rest of the race finishing nearly five minutes behind the leaders.

Precision Concept’s Robby Bell had his bell rung a few times this round with a couple of get offs in the woods, which also kept him on the podium for only the second time this season with a fourth place finish.

Rounding out the top five was RPM KTM’s Justin Jones after he flew in the night before the WORCS race from Loretta Lynn’s where he scored a top ten finish in the Open Pro Sport class.  Jones got off to a slow start since he missed practice on Saturday, but he rode smooth and consistent laps, which allowed him to work his way up to the fifth spot by lap five, which is where he stayed to the checkered flag.

In the Pro 2 class, RPM KTM’s Travis Coy claimed his fifth straight class win after battling with Husqvarna mounted, Justin Morgan, for most of the race,  but in the final laps of the race, Coy was able to pull away from Morgan to secure not only the win, but he also finished third overall.

Morgan held on to claim the second spot on the box ahead of RPM / KTM’s Justin Wallis in third.

In the Pro 2 Lites class, Yamaha / Verasty’s Michael Del Fante claimed his third straight win, but it didn’t come easy with Zachary Burrell closing the gap on Del Fante in the final laps of the race, but Del Fante was up to the challenge as he held on for the win, which has him within two points of clinching the class championship.

Round eight of the Rocky Mountain MC World Off-Road Championship Series Presented by Motoworks and Dirt Bike heads to Glen Helen Raceway in Devore, California on September 12-14th as the WORCS racing season heads into the final stretch with just two rounds of racing remaining on the schedule.