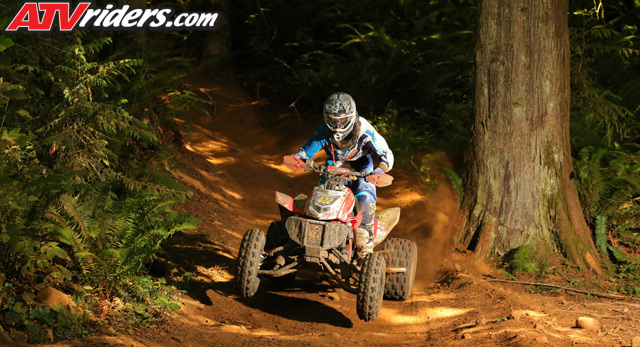 The WORCS series made its return to Straddleline ORV Park in Washington State after a three year absence. Racers were greeted by warm temperatures, sunny skies and a challenging course through the trees, which is a change from the normal desert style races the series sees on a regular basis. This track also included a very challenging WORCS X section with plenty of log and tire obstacles.


On Saturday, the WORCS X challenge saw plenty of action as Tim Shelman threw on his gear and went head to head with Beau Baron. Even though Shelman no longer races on a regular basis, he gave Baron a good fight. The pair battled and Shelman took over the lead, but flipped late in the challenge, which allowed Baron to get by and take the win. Baron would continue that winning streak the following day in the Pro main event.

Although he is a California native and accustom to desert racing, H&M Motorsports’ Beau Baron loves racing through the woods and it showed for round seven. Baron was third off the line for Sunday’s pro race, but Baron quickly charged his way into the lead, and by the midway point of the race, he had a commanding lead over the competition. Baron took the Pro win by almost two minutes ahead of second place.

H&M Motorsports’ David Haagsma was second off the start and was doing a good job of holding off his teammate, Beau Baron, but in the second lap, Haagsma took a different line and hit a root, which allowed Baron to slip by. Haagsma stayed close and passed Mitchell to take over the second spot on the podium.

417 Motorsports’ Josh Row was in the number four spot off the start and held his ground for several laps before he was able to move into third place and hold that spot for the final two laps of the race to keep him in the points chase.

Robbie Mitchell, who is known for his good starts, did not disappoint for round seven. Mitchell grabbed the holeshot and was doing a good job of holding off Beau Baron. Unfortunately, Mitchell fell back to second after two laps, but a couple of mistakes and a crash late in the race, cost him and he would finish in fourth place.

Garrin Fuller rode a consistent race for round seven. Fuller was in fifth off the start and held his position from start to finish.  Fuller is also currently holding down fifth place in the points chase and is one point ahead of WORCS veteran, Dustin Nelson, who was absent from round seven.

In the Pro-am class, Mike Sloan took his fourth win of the season, giving him a three point lead over Matt Hancock. Sloan was in the lead early in the race but fell back to third in the second lap. Sloan was able to regain his lead and went on to take the Pro-am win followed by Ryan Waldo and Matt Hancock.

Round number eight of the 2014 WORCS series will head to Glen Helen raceway in Devore, CA on Sept. 12-14th, and with only two rounds left in the season, the points battles will be fierce.