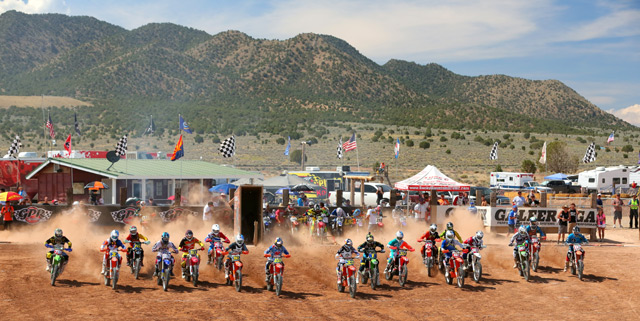 Cedar City, Utah -The 2012 WORCS Pro Motorcycle Champion, Taylor Robert, made his 2014 debut at round six of the 2014 Rocky Mountain MC World Off-Road Championship Series presented by Motoworks and Dirt Bike Magazine, and Robert raced a flawless race to secure the win, which is where he left off in 2013.  Precision Concept’s Robby Bell and Justin Seeds rounded out the Pro podium

The WORCS series headed to Iron Mine Race Park in Cedar City, Utah for round six of the series after Pala Raceway in California was shut down after the schedule was set for 2014, but WORCS community came together and found the perfect location for the mid summer event on short notice.  This new race location on the WORCS schedule proved to be one of the fastest tracks of the season with some wide open field sections along with a mix of motocross, endurocross, and tight switch back sections to keep it exciting for the racers.  The weather was nearly picture perfect besides the heat with temperatures approaching the century mark by the end of the race, but this can be expected for this time of the year.

Several WORCS racers from the past made the Iron Mine WORCS event their season debut with KTM’s Taylor Robert and Ivan Ramirez along with Honda’s Colton Udall and Mark Samuels making a surprise appearance, which had a stacked field of racers going for the Pro win, but Taylor Robert was up to the challenge as he extended his personal win streak to eight straight races spanning over the past two years.

Red Bull / KTM’s Robert got a great jump out of the gate as he grabbed the holeshot ahead of his teammate, Ivan Ramirez.  Robert was racing on the 450 KTM, but he appeared to be right at home as clicked off impressive laptimes lap after lap, and he only lost the lead briefly when he made a pit stop, but he quickly regained the lead the following lap.

The highspeed race took its toll on Robert’s hands that blistered up in the final laps of the race, which allowed Bell to close the gap to eight seconds on Robert in the lead, but Robert held on to secure the win, and he has won every WORCS race he has attended since June of 2012, which is a pretty impressive winning streak for Robert.

Precision Concept’s Justin Seeds secured his third straight podium finish with a third place finish against a stacked field of racers this weekend. Seeds got off to a sixth place start, but he started picking off racers and moved into the third spot in the final laps of the race to claim a spot on the podium..

The 2013 BAJA 1000 Champion, Colton Udall finished out the day in the fourth spot on his Honda.  Udall got out of the gate in last place, but he gradually worked his way through the pack to the fourth spot ahead of his teammate, Mark Samuels, rounding out the top five in the Pro class.

The WORCS pro point’s leader, Gary Sutherlin, finished off the podium for the first time this year with a seventh place finish behind Eric Yorba in sixth.  Sutherlin charged into the second spot early on, but he had to pit early to replace the fuel injector, which dropped him back to a seventh place finish, which allowed Bell to close the points gap on Sutherlin heading in the final three rounds of WORCS racing.

In the Pro 2 class, RPM / KTM’s Travis Coy extended his winning streak to four straight, which extends his points lead in the championship race to 25 points over second place, Matthew Maple.

The Husqvarna mounted, Justin Morgan, lead the majority of the race till experiencing bike issues in the final laps, which allowed Coy to take over the lead and win.  David Broderick claimed the second spot on the Pro 2 class podium with Mathew Maple rounding out the podium in third.

In the Pro 2 Lites class, Michael Del Fante claimed his second straight win as he charged from the third spot and into the lead in the final laps of the race.  Blayne Thompson grabbed the holeshot and held the lead for the first half of the race until his motorcycle exhaust pipe cracked, which ended his day.

Th battle was on between Del Fante and Jesse Lundin for the win, but Lundin went down in the final laps, which opened the door for Del Fante to take the win by riding smart to checkered flag for the win. Yamaha swept the Pro 2 Lites podium with Jesse Lundin securing the second spot followed by Dalton Shirey in third

Round seven of the Rocky Mountain MC World Off-Road Championship Series Presented by Motoworks and Dirt Bike heads north to Straddleline ORV in McCleary, Washington on August 1-3rd, which is just three weeks away before the WORCS racing action resumes in the pacific North West.