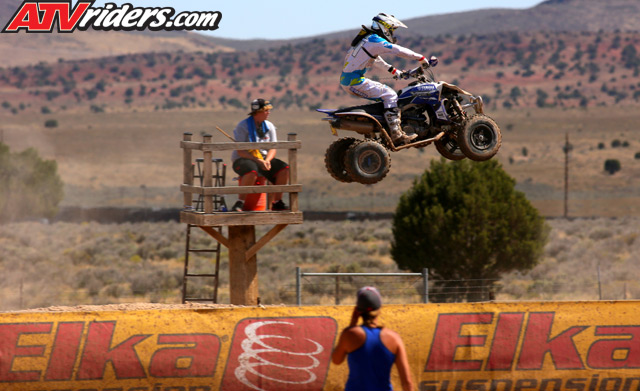 Cedar City, UT – H&M Motorsports’ Beau Baron takes his fourth win of the season at round six of the 2014 Rocky Mountain ATV WORCS series presented by DWT and DirtWheels, held at Iron Mine Race Park in Cedar City, UT.  This win makes two in a row for Beau Baron, stretching out his points lead over Sparks / Elka’s Josh Row who finished in second followed by Yamaha’s Dustin Nelson

Round six of the 2014 WORCS series was forced to acquire a new venue after the recent closure of Pala MX in Southern California.  Thankfully Iron Mine Race Park in Cedar City, UT provided a perfect location for the sixth round of the season.


The WORCS combined main events got underway just before 11:00am on Sunday morning, with the ATV’s starting after the motorcycles.  When the gate dropped for the Pro ATV’s, it was LMR’s Robbie Mitchell making it to the first turn ahead of the pack. H&M Motorsports’ Beau Baron was able to make several passes early on to put his Honda TRX 450R into the lead by the end of the first lap.

Once in the lead, Baron took advantage of clear track and lead the remainder of the race besides one lap when he pitted for fuel, but he regained the lead the following lap, which he held to the finish for his fourth win of the season and second in a row.  Baron’s win extended his points lead by three more points to a total of 11 points now heading into the final three rounds of the season.

Spark Racing’s Josh Row was excited to see that Iron Mine Race Park track had a gate drop start and he took full advantage of the live engine start, by putting his Honda 450R near the front of the pack, heading into the off-road in the top three, and he eventually took over the lead when Baron pitted for fuel, but on the following lap, Row pitted and dropped back to second place, which is where he stayed till the checkered flag.

Yamahas’ Dustin Nelson wasn’t able to get a great start, but he pushed hard the first few laps and made his way up into the second spot.  Late in the race Nelson, would fall back to third position due to blistering that made it tough to hold onto his Yamaha YFZ 450R.  Nelson has seen plenty of ups and downs throughout the 2014 WORCS season, so he was happy with the third podium spot, which is only his second podium finish of the season.

H&M Motorsports’ David Haagsma dealt with mechanical issues for most of the race, which kept him from pulling the top speeds needed during the multiple fast off-road sections.  Haagsma was disappointed to be off the podium, but happy to salvage a fourth place finish, and he is only six points behind Row in the points chase.

Zbros Racing’s Robbie Mitchell was running strong until his front tire came off the bead.  Luckily his Tireblocks were able to get him to the finish in fifth place.

Duncan Racings’ Garrin Fuller struggled with the heat at round six, eventually pulling off the course after completing seven laps.

In the WORCS Racing Pro-Am class, Pro Motorsports’ Matt Hancock got off to a decent start and was able charge his way into the lead early on.  Once in the lead, Hancock was able to maintain it all the way to the finish, grabbing his first ever WORCS Pro-Am victory.  With Hancock’s win he was able to close the gap on series points leader Mike Sloan down to just three points, heading into the last three rounds of the 2014 Season.

Lonestar Racings’ David Flores after suffering from mechanical issues the past two rounds, was able to put his Honda 450R back on the podium at Iron Mine Race Park.  Despite a mid pack start and some issues bearing issues, Flores was able to battle his way through the pack, ultimately finishing in the second spot ahead of Mike Sloan, which now has him tied for third place in points with David Borges.

STI’s Mike Sloan rounded out the Pro-Am podium with a third place finish on the day.  Coming into this round Sloan held an eight point lead over Matt Hancock in the Pro-Am series standings.  With Hancock’s win today and Flores finishing ahead of Sloan, the points are tight heading final three rounds of the season.

The 2014 WORCS series will head to northern most round, in just three short weeks. Round seven will be held August 1-3 at the infamous Straddleline ORV park in McCleary, WA.  The points battles in both the Pro and Pro-Am ATV classes are extremely tight which will make for some exciting racing action, as racers battle for the 2014 WORCS Championship.