Posted on May 11, 2014 by Podium Promotions Leave a comment 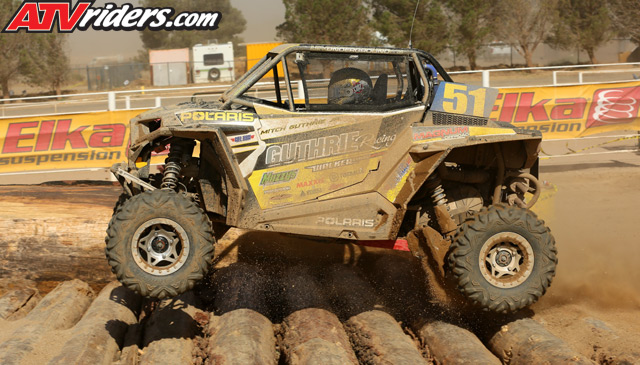 This was the first time for the Desert Empire Fairgrounds to host the series and racers were greeted by good weather and sunny skies on Saturday morning, however, some unusual conditions developed in the afternoon when a sand storm blew through the area, which made visibility difficult during the SxS classes. Winds reached 70MPH which brought total white out conditions during the race at times.

Track conditions were good despite the sand storm with a mix of motocross, wide open sections and desert. There were over 50 SxS’s that turned out for this round and they were quite pleased with the course.

WORCS Pro SxS points leader, Beau Baron, was on the first row for the SxS Pro start and grabbed holeshot. Baron was not alone, however as Mitch Guthrie jr challenged him early in the race. Baron held off Guthrie jr and started to pull away. By the final lap, Baron had over a minute lead before taking the checkered flag. “It was a good race, but the course was really hard to see because of the sand storm. I had a great start; my Sparks engine pulled hard and got me the holeshot. I led the whole way, but Mitch Guthrie was right on me for most of the race. My Polaris RZR did great out there and I was able to take another win,” said Baron.

Pro SxS rookie Mitch Guthrie jr was second off the start and was close behind Beau Baron. Guthrie jr made several attempts, but was unable to make a move on Baron and eventually settled in for a second place finish.

Holz racing’s RJ Anderson was in fifth off the start and was right on Jeff Obering’s heels, who was in fourth off the start. Anderson and Obering battled hard, but Anderson got by Obering at the midway point when Obering flipped and dropped back to sixth. Obering’s misfortune allowed Anderson to take over fourth and charge his way into third to claim the final spot on the WORCS Pro SxS podium.

Ryan Piplic had a good start was running in third off the start but a broken belt, sent him back to seventh. Piplic was able to fix the issue and made a hard charge, which brought him up to a fourth place finish.

The only Kawasaki Teryx racer in the WORCS SxS Pro class, Nolan Remlinger, grabbed the holeshot on the second row, and he hung on to finish in the top five less than four seconds behind Piplic.

In the SxS 1000 class, Mike Gardner and Matt Hancock were side by side going into the first turn, but Gardner grabbed the holeshot over Hancock. Gardner held his lead from start to finish and took the SxS 1000 win. Gardner’s win also allowed him to take over the points lead in the SxS 1000 class as the battle at the top heats up heading into the second half of the season.

H&M Motorsports’ David Haagsma took fourth off the start and, despite the visibility conditions; he was able to make several passes and caught up to leader, Gardner. Haagsma tried to make several moves for the lead, but ran out of time before he was successful and settled for a second place finish, which offered a little vindication after his mechanical issues at round four.  Haagsma is now currently in the second in points just one point ahead of Hancock.

Casey Wallace grabbed the holeshot on the second row of the SxS 1000 class, and he made a hard charge. Wallace pulled into third and held it all the way to the checkered flag. Keith Johnson gave a strong effort as well as he was running in third, but dropped back for a fourth place finish, while Shawn Viola rounded out the top five in the SxS 1000 class.

In the 850 class, Danny Rosenzweig took his fourth win of the season aboard his John Deere RSX 850 machine. Rosenzweig was second off the start and made the pass on leader Chris Willing at the halfway point and held his lead all the way to the finish line, claiming the top spot on the 850 SxS podium, which moved him to within two points of Jim Berry who finished in third place behind Chris Willing.

The 2014 WORCS series racers will get at least a two month long break or longer depending on if the July 11-13th race will be held in Pala, California or at another location, which will be decided this coming week.  The points battles in all the WORCS SxS classes is still fairly tight, so the final four rounds of the season will make for some exciting racing action as racers battle for the 2014 WORCS Championship.