Posted on January 19, 2014 by Podium Promotions Leave a comment 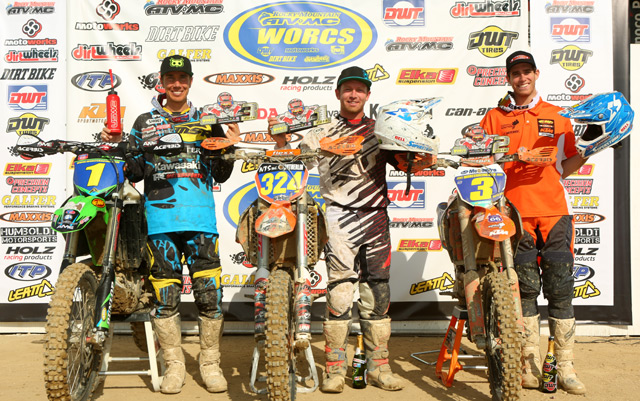 It felt more like spring than winter for the opening round of the WORCS season with temperatures spiking into the 80’s, which brought out a combined 1,000 total entries and ten in the pro class for the weekend. It remained extremely dry with California with the hills sides covered in brown grass, but the WORCS crew kept the dust down by keeping the track watered throughout the weekend

On Sunday morning, the gate dropped for the two hour long race, and it was RPM / KTM’s Eric Yorba grabbing the Holeshot followed by Justin Jones and Robby Bell, but Yorba’s lead would be short lived as dropped back to third by the end of lap one with Jones taking over the lead for several laps, but at the end of the race, it was Gary Sutherlin holding down the front spot for the win.

Sutherlin got off to a great start running in the second spot behind Jones the first couple of laps, but he experienced some arm pump, which forced him to slow down his charge. “I had a good first lap and felt really good, but then I pumped up really bad. The first half of the race, I was tight and couldn’t hit my lines and just not riding very good. Finally, after I pitted, I calmed down and everything started to come together,” said Sutherlin.

Sutherlin really came on strong in the final laps as he charged his way from fourth place to the lead in the final four laps, which made for an exciting finish to the race with Sutherlin taking over the lead from Bobby Bonds in the final lap after Bonds suffered a flat rear tire.

“Unfortunately, Bonds had a little tire issue, which was too bad because he was riding great today, but I am just happy to be up here on the box. Times are tough and to be up here with a win and make some money is great, and hopefully we can just keep building off of this for the rest of the year,” said Sutherlin on his win.

RPM / KTM’s Justin Jones got off to start and he lead for first several laps of the race before dropping back to the second spot behind Bobby Bonds in lap four, but Jones wasn’t about to give up as he battled back and forth with both Bonds and Sutherlin throughout the race, and in the end, Jones finished a Pro career best second place after finishing in the third spot five times in 2013.

“The pace was super-fast right from the start. It was by far one of the fastest races I’ve been in for two hours, and it was so demanding. I am stoked to break my third place streak with a second, and “I’m ready to build on that,” said Jones.

Rounding out the Pro Podium was 2013 WORCS Champion, Robby Bell. Bell got off to a great start, but he also suffered with arm pump early on in the race, which kept him in the fourth spot for the first half of the race.

“I just struggled with arm pump right off the bat. These guys were riding really fast, and I just couldn’t match the pace, but right around the midway point, I started to loosen up. I felt really good and the bike was working really well. I started catching those guys and making a passes.” said Bell.

It appeared Bell was going to challenge Bonds for the lead after moving into the second spot with three laps to go, but Bell lost his rear brakes, which forced him to slow his charge for the lead, but he was still able to hold onto the final podium spot.

“I completely lost my rear brakes and I tried to just power through it and a few of the spots were really sketchy. It’s frustrating you know, I wanted to come out and make a statement for the new sponsors, the new team, and the new number. I’m just really happy to make it up on the podium. Congrats to the other guys though as they rode really well. I’m planning on coming out on fire at Primm” said Bell

R&D Racing’s Bobby Bonds came on strong in his first WORCS race in over two years by quickly taking over the lead in lap four. “We actually started out really well, and they watered really heavily, so I just cruised the first lap. I started picking my way through, and I got to the lead within four laps. I was really just trying to control the race without over exerting myself because I haven’t done a two hour race in a long time,” said Bonds.

Bonds plan appeared to be coming together till the final lap when his Moose Tube came out of his rear tire, which left him with a flat tire. Bonds was forced to move over and watch not only his lead, but a spot on the podium slip away with him crossing the finish line in the fourth spot.

“Not to sound cocky, we didn’t come here to get second or third, or use the excuse ‘I haven’t raced for two years’, I came here to win, and that’s what I was going to do. I really came here with the intentions on leaving with a win, period. It’s just an unfortunate thing,” said Bonds.

Evan Kelly rounded out the top five in the pro class ahead of Ty Tremaine and Eric Yorba.

The 2013 Pro 2 Lites champion, John Burr Cycles’ Steven Gibson, made an impressive debut in the Pro 2 class by taking the win at the season opener. Jeremy Lasater claimed the second spot followed by Justin Morgan.

Round two of the WORCS Series will be held in Primm, Nevada at Buffalo Bill’s Resort and Casino on February 8-9th.