Posted on October 13, 2013 by Podium Promotions Leave a comment 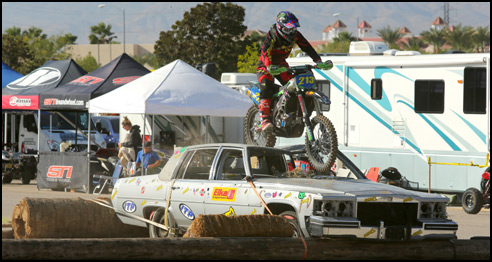 Primm, NV – Round nine of the 2013 Rocky Mountain MC World Off-Road Championship Series presented by Motoworks and Dirt Bike Magazine season finale was held at Buffalo Bills Casino in Primm, Nevada. The 2013 WORCS Pro Champion, Robby Bell, claimed his fourth win of the season followed by Bobby Garrison in second place with Justin Jones rounding out the Pro podium. RPM KTM’s Eric Yorba claimed his sixth win of the season in the Pro 2 Class to wrap-up the Championship at the season finale.

The weather could not have been any better this weekend at Buffalo Bills in Primm, Nevada with temperatures in the mid-seventies with a steady breeze, which keep the dried out the track, but dust wasn’t an issue with the wind. The racing kicked off at 9:30 AM on Sunday. The start of the race this round was different than most with both Pro ATV and Pro Motorcycles racing at the same time to help shorten up the racing day to make time in the afternoon for the awards banquet.

Precision Concept’s Robby Bell took the win after an intense battle with Bobby Garrison. Bell started the race in third and gained positions lap by lap. Navigating through the slower quads on the track, Bell found openings in the traffic to make his move for first on lap five

After wrapping up the championship at Honey Lake, Bell really wanted a win to finish out the season, but it didn’t come easy with Garrison keeping him under pressure for nearly the entire race, and in the pro section, Bell nearly lost the lead when he went down going over the pavement debris pile, but Garrison also went down after landing on Bell’s rear tire, which had the pair scrambling to remount, but Bell was able to get going first, and he held on to secure the win over Garrison.

“I’m glad I was able to regroup, get back out front and finally get a win. I’m so stoked not only for myself and my whole team, my mechanic, and everyone who has been working hard all year. I am glad to start paying back with a win and finish off the season on top,” said Bell after his win.

“I wanted to get that win. I tried to give Robby a run, but he had a little too much for me. I got kind of tired and just tried to run my own race. I saw Jones reeling us in and really wanted to hold down second in the championship so that was my main this to stay in front of him,” said Garrison after taking second place.

Justin Jones rounded out the top three today with his fifth podium finish of the season. Jones found himself in a battle with Justin Seeds right off the line as the pair battled for the holeshot with Jones holding the lead after the first lap, but he would drop back to third in lap two with Garrison and Bell making the pass, but Jones found himself battling with Justin Seeds for the final spot on the podium in the final laps as Seeds moved within 2 seconds of Jones in lap nine, and he stayed in his shadow to the checkered flag with Jones holding onto the third spot

“Seeds and I were really going at it. I think if we would have found each other early on in the race we could have mixed it up with the big boys but that’s ok. We are rookies and learned a lot and plan on coming on hard next year,” said Jones after the race.

Precision Concept’s Justin Seeds missed Honey Lake after wrecking on his bicycle and injuring his knee, but he was back on his game at Primm as he battled with Justin Jones for the final podium spot, but wasn’t able to make the pass and finished in fourth, which also secured him fourth for the year in points.

“I wish I could have gotten on the podium. I have been pushing really hard off the track but this injury has been bugging me pretty bad. I haven’t been able to ride very much because I don’t want to injure it even more. I am happy to be in forth and run those guys down to show I have some speed. I hope to come back next year super strong and run those guys down for a win,” said Seeds after taking fourth place this weekend.

Tyler Renshaw finished fifth, followed by Gary Jones aboard his Honda who finished sixth. Renshaw gave a great effort on lap three and four to get around Seeds, but began to fall back securing his finish for the weekend earlier in the race.

“It came down to the last race, I knew what I had to do this weekend. I had a pretty bad start but just starting pushing to the front, built up a pretty good lead and rode away for another championship,” said Yorba afterwards.

Blayne Thompson claimed the Pro2 Lites win after making the pass on the class champion, Steve Gibson. Gibson held the early lead, but dropped back to a fourth place finish when he started having issues with his motorcycle.  Tristen Morris claimed the second spot and Brandon Roberts rounded out the podium.

The 2013 Rocky Mountain MC World Off-Road Championship Series presented by Motoworks and Dirt Bike Magazine season was intense coming into the last round, and it will be interesting to see how the beginning of the 2014 season kicks off in February back at Buffalo Bills Casino in Nevada for the season opener.