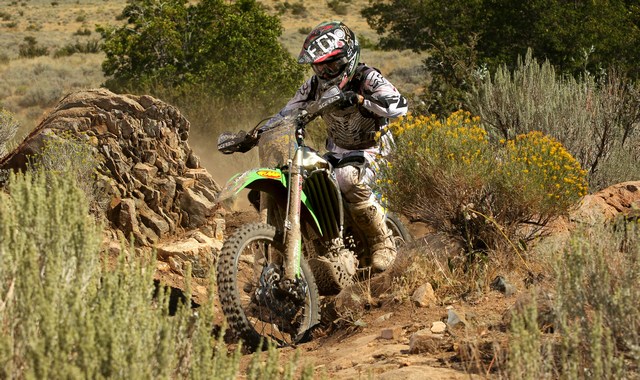 WORCS racers were treated to a great weekend for racing, and the Honey Lake Motocross venue proved to be a favorite of many of the racers that made the trip to northern California. While the race was held at a motocross track, it was one of the more extreme off-road courses of the year with very little moto racing. The majority of it was up on the hill side in the trees with plenty of rocks to challenge the racers, and two pro sections were added for the main with a dry waterfall downhill section along with a rhythm section without any rhythm along pro row.

For Gary Sutherlin, this was one of his favorite race tracks of the year. “This is the best WORCS course we have had. I like this kind of stuff and I wish there was more of it,” mentioned Sutherland after the race.

Gary Sutherlin secured his fourth podium finish of the season and first WORCS pro win after an impressive run at Honey Lake. Sutherlin got off to a great start and made the pass on the Justin Jones early on in the lap. Sutherlin held the lead till the midway point of the race when he was passed by Robby Bell during his pit stop.

“Jones actually pulled the holeshot, and I got him right off the bat on the moto track. I knew it would be crucial to get out front because there was a little bit of dust. When we pitted, Robby passed me, but I regained the lead when he went down. I didn’t really have any pressure after that so it was kind of nice,” said Southerland after his race.

It took Robby Bell several laps to make the pass on Jones before he could start closing the gap on Sutherlin out front, and a strategic pit stop allowed Bell take over the lead in lap seven. “The pit crew made a good call. They sent me an extra lap when Gary had pitted, so I was able to pull enough of a lead to pit the next lap and maintain a lead after my pit stop,” said Bell

Bell’s lead would be short lived after he went down in the rocks, which allowed Sutherlin to pass for the lead. Bell then would get stung by a bee on the back of his neck, and his body began to react to the sting, which had Bell chasing after some Benadryl after crossing the finish line with a second place finish and the 2013 WORCS Pro championship. Fortunately, he didn’t have a severe reaction, but it still took its toll on Bell as he was extremely weak and could barely stay on his feet during the podium celebration.

Tim Shelman, WORCS Director of Operations, presented Bell with the number one plate on the podium during the podium celebration. “I have been chasing the WORCS series championship for about six years, so I guess you could say it has been a long time coming. I have learned a lot about myself both mentally and physically. I feel like it has all come together, and it feels really good to get the championship after so many years of trying,” remarked Bell afterwards.

Rounding out the pro podium, Moose Racing’s Bobby Garrison came on strong in the final laps of the race and was able to reel in Justin Jones after battling for several laps to take over the final spot on the podium.

“I could tell Jones was tired. The track was really rough and we both want that number two for the series. I knew it was going to be all I had to get him. We made quite a bit of contact there towards the end. He kept it clean, and I tried to do the same,” said Garrison.

Garrison’s third place finish earned him some valuable points as it extended his points lead over Jones to just three points heading into the final round of the season.

KTM’s Justin Jones grabbed the holeshot and ran in the third spot for the majority of the race, but he ran into some issues late in the race dropped him back to the fourth spot after battling with Garrison. “The front of my skid plate actually broke off right when Bobby Garrison put the charge on. It actually scooped into the dirt and locked my motor up. I was messing with that for a minute or so and that took a lot of energy,” mentioned Jones following the finish.

Yamaha mounted, Ross Neely, rounded out the top five in the pro class just under thirteen seconds behind Jones at the finish line.

In the Pro 2 Class, RPM KTM’s Ty Tremaine secured his first win of the season after an early battle with second place finisher, Eric Yorba. Tremaine took over the lead in lap five, and he held it to the checkered flag for the win.

Yorba claimed the second spot on the podium followed by points leader, Starr Savage, in third for a KTM podium sweep in the Pro 2 class, and only a few points separate all three KTM racers heading into the final round of the season in the race for the championship, which will make for a dramatic race to the finish at the WORCS season finale.

In the Pro 2 Lites, John Burr Cycle’s Steve Gibson claimed his sixth win of the season after grabbing the holeshot, which boosted Gibson back into the points lead over Alex Morgan who finished in fourth. Gibson missed the last round of the series at Glen Helen after cutting his hand at work, and he is looking to take his seventh win of the season and the championship at the season finale.

Brandon Roberts secured the second spot on the podium followed by Mitch Anderson in third in the Pro 2 Lites Class.

Round nine of the WORCS Series heads to Buffalo Bill’s Casino in Primm, Nevada on October 11-13th for the season finale with several championships still up for grabs.