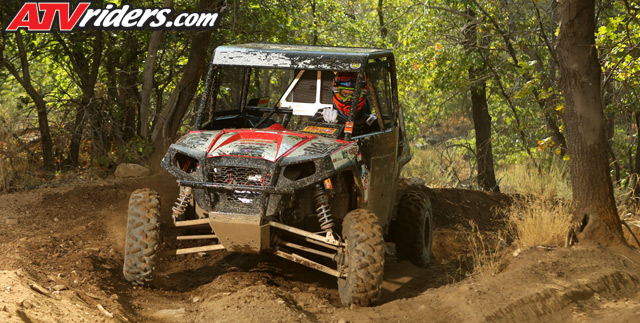 Milford, CA – Holz Racing’s Beau Baron secures his third win of the season at round 8 of the Rocky Mountain MC World Off-Road Championship Series presented by Dirt Wheels Magazine and Motoworks at Honey Lake in Milford, CA. Rounding out the top three in the SXS Pro Production class were Ryan Piplic finishing second and Jeffrey Obering with third.

Beautiful weather greeted those who attended round 8 at Honey Lake MX this weekend. Racers had a very narrow and rocky course to contend with that didn’t allow for very many passing opportunities, so many racers were pushing it to the edge to gain a spot.

Beau Baron scored the holeshot from the first row in his Sparks Racing powered Polaris RZR XP 900 with Pablo Veglia and Ryan Piplic battling for position close behind. Lapped traffic was a continuous issue due to the tight course and limited areas to pass.

“My Holz, Polaris, Walker Evans, Sparks race car held together great and got me off to a good start. My Maxxis tires hooked up all the way to the first corner and I couldn’t ask for anything more,” said Baron about his holeshot.

Baron was feeling the pressure from Vaglia and Piplic early on the race, but the pair collided while battling for the second spot, which gave Baron some breathing room as he cruised to the win in the final laps, which extended his points lead to thirteen points over Piplic heading into the final round.

“The course was so tight we had to wait to get to the motocross track in order to pass. It made it really tough because the guys behind me were giving me some love taps here and there ,and I knew it would be a free-for-all once this particular lapper got out of the way,” said Baron.

Cognito’s Ryan Piplic started third and would have some tough luck later in the race that would eventually work out in the end. Piplic made the pass on Veglia for second when Veglia went wide through a turn, but Veglia wasn’t about to let the position go without a fight, so he charged into the next corner and the pair collided with Piplic flipping on his side.

Once up righted, Piplic would continue the rest of the race and finish second for the day. Veglia was unable to finish the race due to the damages he sustained to his Can-Am Maverick 1000R from the collision.

Looking forward to the last round, Piplic remains positive by saying, “Last year, I came into the final round in second place, and came out with the championship, so I hope history repeats itself again this year,” said Piplic.

Jeffrey Obering battled from the back of the pack, gaining positions lap by lap. In the very last lap, Obering took the third spot from David Martinez, putting him up on the podium for the first time this season.

Despite the last lap mistake, David Martinez had his best finish of the season. Starting towards the back, Martinez worked hard to make his way towards the front about halfway through the race, running third, he was passed on the last lap and took a fourth place finish.

“I’m pumped right now! ITP tires were hooking up, Murray Racing Team built me an awesome car with the Can-Am Maverick. The FOX shocks were working great. I couldn’t say enough for the WORCS program. It was a long drive and totally worth it. I am just happy to have a strong finish and keep the car together with a fourth position finish,” said Martinez after the race.

Gilbert Flores rounded out the top five for the day after an intense battle with James Hill in the second half of the race. The two racers swapped positions back and fourth, but ultimately, Flores captured the position over Hill.

In the SxS Production 1000 class, Jacob Shaw would lead most of the race with intense competition from Mike Gardner. Shaw ended the race with a victory leading Darren Kelley who finished second. Cody Sutsman rounded out the podium finishing third after working hard from his ninth position start off the line. Second place in points going into this round, Michael Gonzales took fourth place and Matt Hancock finishing fifth.

Justin Lambert took the win this weekend in the SxS Production 850 class. After starting second, he would lead the rest of the race, but Lambert had Daniel Rosenzweig in the John Deere challenge him for the win in the final lap with the pair finishing nose to tail at the checkered flag. Sara Price rounded out the top three in the class.

“I got the holeshot and some other guys had some issues. I ended up with the win and wrapped the championship up a round early,” said Haagsma after the win.

The final round of WORCS Racing will take place at Buffalo Bill’s Casino in Primm, NV. Check back for the conclusion of the season finale between Pro SxS racers Ryan Piplic and Beau Baron as they battle for the championship.