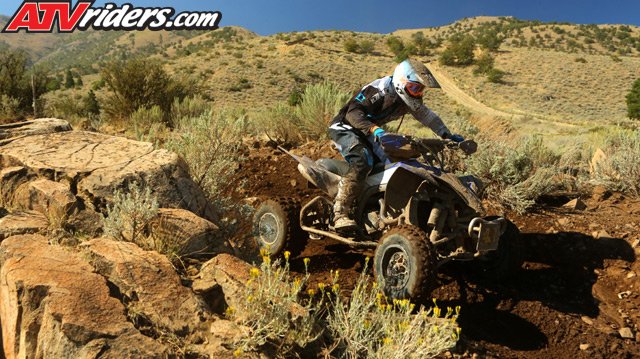 This was a great weekend for WORCS Racing with temps in the mid-seventies and a clear, beautiful sunny day for a really tight technical course. With numerous elevation changes, plenty of rocks, and a short terrain rhythm section that didn’t have any rhythm, the Honey Lake MX track proved to be a challenging course.

Beau Baron came off of the start in the third position following just behind Robbie Mitchell, but Mitchell landed on a rock, which bent his sprocket, which opened the door for Baron to move into the second spot and begin his charge of David Haagsma.

Baron was able to make the pass on Haagsma at the midway point of the race after Haagsma began to slow down from a right rear flat tire, but later in the race, Baron would also get a right rear flat tire as well, which forced him into the pits for a new tire. After the tire change, he went on to capture his seventh straight victory of the season, which broke the record held by both Doug Eichner and Josh Frederick of six wins. This win put Baron in the lead by twenty-two points over Haagsma going into the season finale.

“The next one I am just going to be looking to get to the end. I want to at least finish half the laps, so I can wrap this one up,” mentioned Baron.

Dustin Nelson started fifth and slowly began working his way towards the front, grabbing a second place finish. “I got a bad start and was back there in fifth or sixth going into the first turn. I rode around in fifth for the first couple of laps, I just worked hard and tried to stay strong the whole time while not making any big mistakes. I could see Beau and was trying to chase him down, but he put in a couple of good laps and got away from me,” said Nelson from the podium.

Nelson was able to pass Haagsma while he was in the pits changing a flat tire. This secured his second place finish, which was his best finish so far of the season. Today’s performance was just the confidence boost Nelson needed going in to the last round. “I am happy to come out of it with a second, that’s my best finish all year. Let’s see if we can close the season out with a win,” said Nelson.

David Haagsma grabbed the holeshot with his Sparks powered Honda, rocketing him into an early lead. “I got a great start. The Sparks engine pulled and I got off the gate great,“ Haagsma said on his start.

Haagsma held the number one spot until he got a flat tire, which allowed Baron to make the pass. When he went into the pits to change his flat, Dustin Nelson made the pass for second place. “I was in the pit and Nelson came around about the same time I left the pits, and he got right in front of me. It was a white flag, and I tried to get by him, but I couldn’t make a move,” said Haagsma after the race.

Can-Am’s Dillon Zimmerman had a great battle early in the race with Nelson, but Nelson was able to make a pass stick with Zimmerman settling into the fourth spot, which he held to the checkered flag.

Robbie Mitchell started the race in second, but the rocky terrain got the best of his machine, bending the rear sprocket. His pit crew was able to get Mitchell’s sprocket changed out, but he would bend another sprocket later in the race, which ended his day early.

Grant Mitchell grabbed the ProAm holeshot and held the lead until he crashed in the terrain section of the course, which dropped him back to a fifth place finish, which allowed David Flores to take over the lead for several laps before Chandler Waxman would take over lead, and he appeared on his way to victory before running into issues in lap eight, which dropped him back to an eight place finish.

Bryce Peart would take over the lead in the final laps and hold it to the checkered flag for his second win of the year, which allowed him to pass Grant Mitchell in the Pro-Am championship points race. Levi Shirley and David Flores rounded out the Pro-Am podium.

Round nine of the WORCS Series heads to Buffalo Bill’s Casino in Primm, Nevada on October 11-13th for the season finale with several championships still up for grabs.