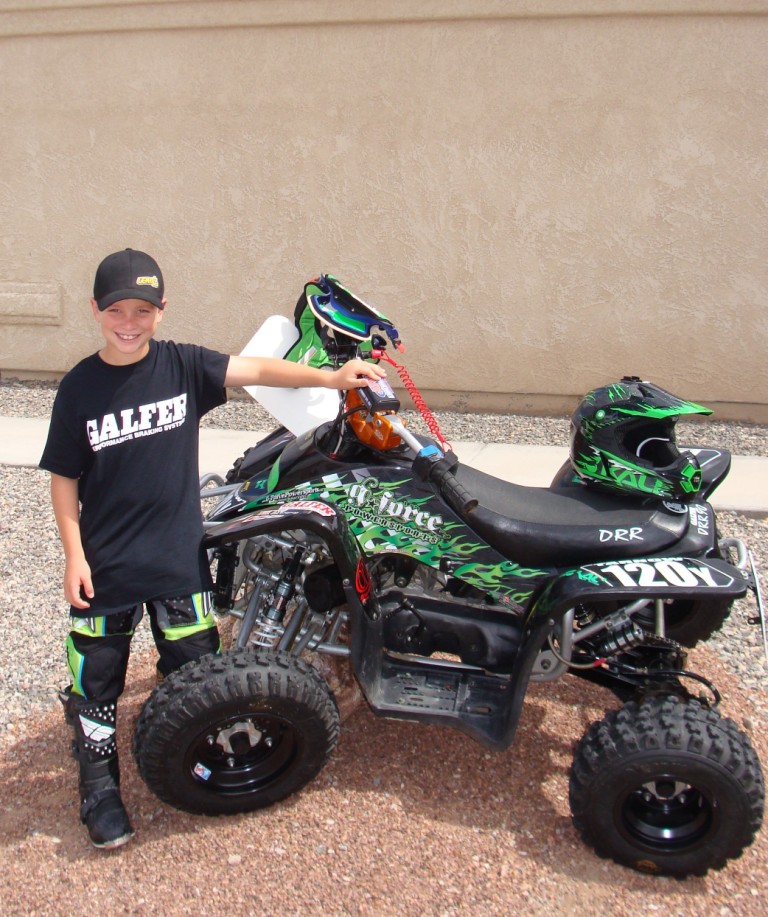 “I like racing because it is something that not everybody gets to do and I feel so privileged to have the opportunity to race a quad, and it’s fun! I like going to new tracks. Some I like some I don’t. I like to race with other racers. I also like riding my bike at the track between my races. I like seeing my family and friends at the races. I plan to keep racing for as long as I can and maybe get two overall class championship titles next year.”Gordon’s BIO:

The first time Gordon rode on a quad should have been a sign to us. He was 16 months old and threw a 5 star tantrum when it stalled and wouldn’t restart.

At 20 months old, we bought a raptor 50 for Gordon and his big sister which he spent many hours riding as a passenger. Shortly after his 3rd birthday, Gordon took control of that raptor 50 and rode in the desert as often as we were willing and able to take him.

When Gordon was 6 and 1/2, we heard about a local motocross racing series including kids on mini quads. Riding his Raptor 50, Gordon entered his first race and took 1st place! Racing 5 of the 7 rounds that season, he earned 2nd place overall in the 50cc class. During that first season of racing, Gordon received a Raptor 90 for Christmas, racing it twice in the 90cc class, he earned 6th place each time. Gordon also entered his first WORCS race that year on his Raptor 50 placing 6th in the 4-6 year old 50cc class.

1 month shy of his 8th birthday, Gordon entered his 2nd WORCS race on his raptor 50 and took 7th place in the 7-8 year old 50cc class. Once he turned 8, WORCS rules allowed him to enter the 90cc production class. The season had 3 rounds left at that point. Riding his Raptor 90, Gordon took home a 5th, a 3rd and a 4th place.

By this time, we knew Gordon was serious about racing and we needed to be as well. In January 2013, he received a 90cc DRR and began his first full WORCS season. With 2 rounds to go, at 9 years old, Gordon is currently sitting in 2nd place overall in the 8-15 year old sport class and 1st place overall in the 90 production class.

In between WORCS races, Gordon continues to ride in the desert near our home or on any local tracks that he can get to! Besides being an avid quad rider, Gordon has always been a straight “A” student, a cub scout and a disciplined Mixed Martial Arts student. We are surely looking forward to what the future holds for Gordon aka Tarnow120!