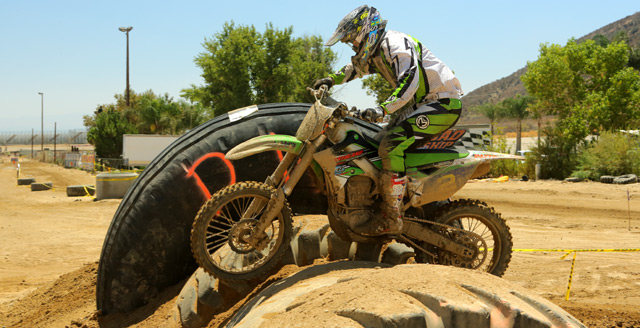 Devore, California – Round seven of the Rocky Mountain MC World Off-Road Championship Series presented by Motoworks and Dirt Bike Magazine was held at Glen Helen, and Monster Energy / Kawasaki’s Taylor Robert claimed his third win of the season followed by Gary Sutherlin and Justin Jones rounding out the pro podium.

Taylor Robert’s busy racing schedule has kept him from competing at the WORCS series since March, but he wasted no time proving why he has the number one plate after taking over the lead from Justin Jones a few turns into lap one. 2013 WORCS points leader, Robby Bell moved in to challenge Robert for the lead, which had the duo recording a second lap-time over twenty seconds faster than the next closest competitor for the entire race. Unfortunately, the epic battle came to an end as quickly as it started when Bell hit a rock in the dust on lap three and went over the bars.

“Robby and I had a really good pace going and we kind of pulled ourselves away from the pack the first three laps, and then I guess he wrecked in the sand wash on lap three or four. I put it on cruise control, didn’t want to push it too hard because I wasn’t feeling too hot,” said Robert about his battle with Bell.

Once Robert extended his lead to over a minute on Sutherlin, he put it in cruise control to conserve energy, and Robert held the lead to the checkered flag for his third win of the season.

Gary Sutherlin also returned to the lineup, and he secured his third podium finish of the season with a solid second place finish. With the WORCS race near Sutherlin’s hometown, he built a Kawasaki for the event in hopes of cashing in on their great contingency for the series.

“It was a last minute thing on Tuesday to decide to put this bike together and I have been kind of changing brands like underwear. It keeps it fun and interesting, but I like the Kawi and they have a great contingency program with WORCS, and I am happy to be on the box,” said Sutherlin.

RPM / KTM’s Justin Jones claimed his third straight podium finish with a third place finish. Jones grabbed the holeshot over Robert, but both Robert and Bell passed him on lap one.   The first two laps, Jones would go down hard in the sand wash, but fortunately, he wasn’t injured went to secure a podium finish.

“I actually went down the first to laps pretty good. I am actually surprised I am up on the podium because of how hard I went down. I’m just stoked to be up here again,” said Jones.

Precision Concept’s Robby Bell got off to a great battle with Taylor Robert for the lead, but unfortunately, he went down hard in the sand wash in lap three, which also broke his throttle cable, so he was forced into the pits to replace the cable, which dropped him back several laps on the leaders.

“I caught up to Taylor and followed him for like a lap and a half and felt confident. I had the speed but maybe a little impatience on my part. I had him lined up in the wash, I felt like I could pass him. I was maybe a little bit to close and was in the dust, never saw the rock, clipped it, went sideways and straight over the bars. I actually ended up breaking my throttle cable in the crash. I couldn’t actually twist the throttle to bring the bike back, so I had to pull on the cable to get the bike back into the pits. My crew did an awesome job getting me back out as soon as possible. Changing the cable and then from there just trying to put in some fast laps to prove to myself that I had the speed today because I felt that I did,” said Bell.

Bell would go on to finish in the seventh spot after putting in some blistering fast lap-times for the remainder of the race, and he is now within striking distance of wrapping up the WORCS pro championship at Honey Lake in September.

Moose Racing’s Bobby Garrison made a surprise appearance at Glen Helen after he announced he was moving to Texas after his Pala win, but several companies including Moose Racing stepped up to help Garrison finish out the season.

“My parents and everyone are going to help me out and get me to the last few races. I wasn’t sure that I would be back, but I am glad to be. It’s really good to be back, Moose really wanted me to finish out the season and they stepped up and helped me. Everything worked out well and I’ll be able to finish the last three,” said Garrison.

Garrison was in the hunt for another podium finish before he dropped out of the race in the final laps with issues, which dropped him back to a sixth place finish.

All American KTM’s Eric Yorba claimed his fifth win of the year at Glen Helen after charging his way past Justin Morgan who grabbed the holeshot and lead the first two laps. Once Yorba got out front, he cruised to the win over his teammate, Starr Savage, and Chuck Ramsey Jr claimed the final spot on the Pro 2 class podium.

“It was definitely fun with a little taste of Baja. High speed whoops, bunch of rocks but tried to keep it safe. For the most part the rocks were pretty exposed so you were able to move around and miss them, but it was a fun course,” said Yorba.

In the Pro 2 Lites, Blayne Thompson dominated the class with points leader, Steve Gibson, missing from the lineup. Thompson took over the lead early in lap one and finished with a three minute lead over Noah Kepple in the second spot followed by Tristen Morris in third.

Round eight of the WORCS Series heads to Honey Lake in Milford, California on September 14-15th.