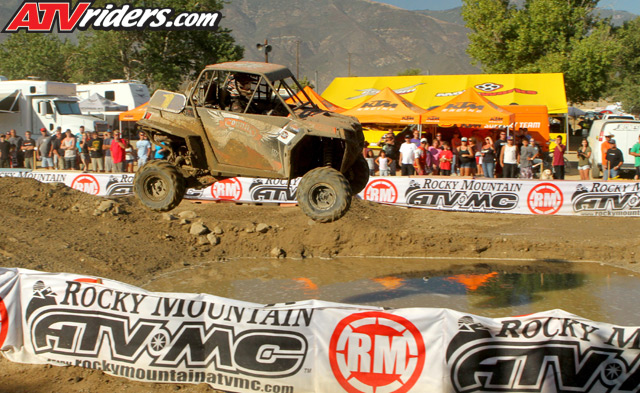 The SxS track featured several gnarly sections with rocks, dust and rough terrain. There was also a lagoon jump to test the driver’s skills; the lagoon jump was a fan favorite point to watch the action.

Cognito Motorsport’s Ryan Piplic raced his Polaris RZR XP 900 to his first win of the season. Piplic rocketed off the line and quickly fell into second place behind current point’s leader, Beau Baron. Piplic kept a close distance to the leader and push his RZR to the limit. Piplic was able to overtake the lead on the second half of the race and secure his first win this season.

“My Cognito Polaris RZR worked awesome. I had luck on my side. Cognito built me a great car and they are the number one reason the RZR stayed together and I am up here. The track was rough, but I had a good time. The lagoon jump was a crowd pleaser and really added to the track,” said Piplic after the race.

Cody Bradbury lined up for his first ever WORCS race hoping for a solid finish; he made the goal a reality by earning second the SxS Pro Production Class. Bradbury had to work hard, he was in 19th place when he came through scoring on lap one. He charged and raced smart to overtake fourth on lap six. He continued to push and was able to secure second for the day when the checkers flew on lap seven.

“I usually race the DIRT Series, and I wanted to try something new so we came out here and I had a great time. The track was great. I had a few minor issues out there, but it all came together in the end. My family came out to support me today and I can’t thank them enough,” regarded Bradbury from the podium.

John Pacheco earned his season best finish aboard his Can-Am Maverick and took the final podium position in the SxS Pro Production Class. Pacheco had his #17 Maverick in ninth place on lap one. He worked through the traffic and carnage to take the third spot on lap six. He was able to hold the position until the checkers and get his IMG Maverick on the podium.

“This was such a good time. I worked hard to keep it together and keep all the wheels on my Maverick. There was a lot of carnage out there and I almost lost it a few times in the rough stuff, but I am really happy I kept it all together. IMG, James Hill, Pro Armor and ITP really helped me out and I am glad to get on the box for them,” said Pacheco from the podium. .

Class point’s leader, Beau Baron, placed fourth on his Maxxis backed H&M Motorsports Polaris RZR XP 900. Baron used his Sparks engine to grab the holeshot and moved into the early lead. Baron was beginning to gap the field when his RZR clipped the table top and began to do an endo.

“At one point, I think I was on one wheel,” regarded Baron about the incident. Baron was able to land the mishap, by gunning the throttle and steering smart. When the mishap occurred he blew a shock and the oil from the shock cover the RZR’s belt. The belt began to slip and forced Baron to back down. He was able to muster a fourth place finish and salvage valuable points when Piplic closing the gap to just ten points in the championship points race.

Jacob Shaw earned his first class win in the SxS Production 1000 class. Shaw put in a solid race and bested second place by 48 seconds. Shaw was followed by Mike Gardner and Darren Kelley. Gardner matched his season best finish with the round and third is the best Kelley has done this season.

H&M Motorsports’ David Haagsma ran his Holz Polaris RZR 570 to his sixth win in a row in the SXS Production 700 class. He used his Viper Maxxis Tires and Sparks engine to grab the holeshot. He worked hard all race to keep his line, and keep the rest of the class at a distance. Haagsma was successful and led the race from start to finish.

“The race went great! My Maxxis Tires, Sparks moto, everything worked awesome. I pulled right to the front and then worked on making a gap. I would catch lappers and it was an accordion effect; my class would catch me and I’d have to pull away again. I just kept pushing hard and it worked out,” said Haagsma after his race.

Cody Rahders and Michael Bunyea rounded out the top three in the SxS Production 700 class. Bunyea is currently in second place in points with Rahders sitting behind him in third.

Kayla Smith earned her first win of the year in the SxS Production 850 class and finished second overall behind Haagsma. Points leader, Alfredo Ramirez finished in the second spot followed by Nolan Remlinger.

The WORCS SxS racing action will continue in a few weeks at Honey Lake in Milford, California on September 13-15th, and check out http://www.atvriders.com for all your SxS news.