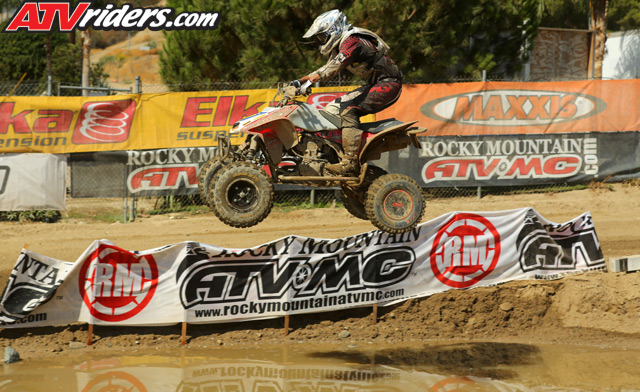 Beau Baron ripped off the line and was in second behind LMR Racing’s Robbie Mitchell who grabbed the holeshot. “I tried to stay tight to him, but he was hitting every puddle. My goggles got all blurry because water got into my tear off’s, so I had to get rid of all of them. Then my hands began to slip off the bars because they were so wet. I watched him take a different line and it turned out in my favor,” said Baron about making the pass on Mitchell

Once in the lead, Baron set a staggering pace for the ten lap race. His teammate, David Haagsma, did catch up, and Haagsma made the pass for the lead when Baron made a pit stop, but Baron regained the lead the following lap and held it to the checkered flag for his sixth straight win.

David Haagsma raced his H&M Motorsports Honda 450R to his fifth second place finish in a row. Haagsma had a decent start and was in third as the pros went through the first turns. Haagsma took over second midway through the race and had to work to catch his teammate. When Baron pitted Haagsma was able to take over the lead for a lap. He then dropped back to second during his own pit stop.

“I just tried to catch Beau. He pitted first and I took the lead, when I pitted he got back by me. I tried all could to get back up to him, but eventually I just fell into my pace and took second. Everything worked really well and I had a great time, so all in all it was a good day,” said Haagsma.

Yamaha’s Dustin Nelson secured the final spot on the podium. He had a good start, although he was forced off the track, which dropped him back to mid-pack, and he held the fourth spot at the end of lap one. He was able to get past Robbie Mitchell on the second lap and from there he rode his own race. He did run into an issue late in the race when he clipped a rock in the sand wash, which sent him over the bars. He landed without injury and got back on his Yamaha and kept going.

“It was rough, but one of the more fun tracks we’ve had all year. I had a great start, but got pushed out. I worked my way up and got into third. I wasn’t able to get up to Beau or Davi, so I just rode my own race from there. My Yamaha worked flawless and I had an awesome time,” said Nelson.

Yamaha’s Josh Row finished fourth after getting off to a fifth place start, and he found himself battling with Can-Am’s Dillon Zimmerman for the majority of the race with the pair swapping the positions a few times during the race, but in the end Row was able to hold off Zimmerman in the final laps.

“This was a totally different track than yesterday. The washouts and ruts were all different from the SxS’s. I couldn’t seem to find my flow today, but my YFZ worked awesome. I was trying to hang with Nelson, but kept making little mistakes. I ended up battling with Zimmerman; we went back and forth with the pit stops. It was a good time,” said Row.

Dillon Zimmerman didn’t have a great start; he was last as the pro’s rounded the first few turns, but was able to take over sixth by the end of lap one. On lap four he passed for fifth position and then battled with Row for the next few laps. He was able to make a pass on Row; however, Row got him back when he stopped to pit.

“My Can-Am worked amazing. It was the best it’s ever been. JRi did a little tweaking on my shocks and it was great. I ran the new carbon fiber rings in my Gold Speeds and they were great. I was really pleased with how my quad and everything was working. I ended up fifth; I made a few mistakes going over logs, but I had a good time,” said Zimmerman.

Garrin Fuller finished in sixth with his Honda. Fuller had to work hard for the position; he was in eighth place at the end of lap one; he progressed to seventh on lap three. And finally took over the sixth spot on the final lap. He had a get off during practice in the enduro section, but didn’t have any issues on race day.

“This was my first real finish this year. I have been training really hard and my results have not been showing it. I am just trying to finish strong for the last few races,” said Fuller.

Robbie Mitchell grabbed the holeshot on his Honda and got away with the early lead. He fell into second midway through lap one. He dropped to fourth on lap two and then his chain came off on lap three. The incident caused him to drop to eighth, but Mitchell rode hard all the way to the finish to salvage points, which currently has him top five in points.

“My Lindsay Powersports motor was awesome and got me off the line quick. My DWT Tires really hooked up and I was pumped to get the holeshot. I was bummed when my chain came off; I felt really good and had a lot of momentum going. I hope I can carry that to the next round,” regarded Mitchell after the round.

In the Pro-Am class, Maxxis’ Grant Mitchell secured his second straight win. Pro Motorsports’ David Flores grabbed the holeshot, but Mitchell made the pass for the lead before the end of lap one. Flores challenged Mitchell several times during the race for the lead, but Mitchell was able to hold on to claim the win, which now has him leading the pro-am points over Bryce Peart who finished in tenth.

The Pro Motorsports’ team secured two spot on the podium with David Flores finishing in the second spot followed by Chandler Waxman, which now has Flores and Waxman tied for the third spot in the pro-am points battle, and the pair is now less than five points behind Bryce Peart, which will make for an exciting battle for points in the final two rounds of the season.

There are only two rounds of Rocky Mountain ATV/MC World Off-Road Championship Series presented by Motoworks and Dirt Wheels Magazine, and the next round is September 13-15th in Milford, California at Honey Lake.