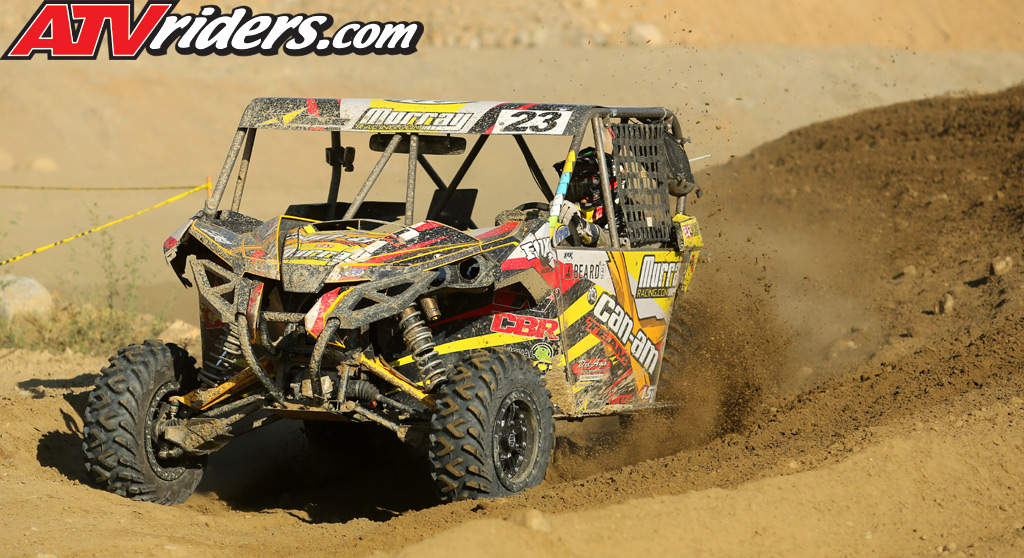 The track was gnarly with tons of rocks and large jumps. The desert section was wide open with rocks scattered about. The motocross section featured an array of jumps that created quite a challenge for the drivers.

STI Tire’s Nic Granlund grabbed his first WORCS SxS Pro Production class win. Granlund started on the second row and quickly made a charge for the leaders. He pushed to third on lap two. On lap three, Grunlund got a flat tire. His pit crew rallied and had him in and out with a new tire as quick as possible. Granlund was then in a time adjusted battled with Ryan Piplic. He continued to charge and took the win; he earned the win with just six seconds separating him and second place.

“The track was amazing. FOX helped me get my RZR dialed in and I just went out there and went fast. My RZR was working awesome and I can’t thank everyone enough. I had a great time,” said Granlund after the race.

“I am going for points and a championship and this finish is going to help with that. It sucks that a few good guys broke, but that’s racing. I took every advantage I could today and really pushed my RZR,” regarded Piplic after the race.

Can-Am’s Pablo Veglia earned his season best finish by taking third on his Murray Brothers Can-Am Maverick. Veglia had a lot of work to do, as he was in eleventh on lap one. He pushed hard, advancing each lap. He took over the fifth spot on lap three, before moving into third on lap four.

“My Can-Am Maverick was awesome. It cornered amazing and handled flawlessly. I think you’ll be seeing us on the box again soon,” exclaimed Veglia after the race.

Motowork’s Gilbert Flores earned his best finish yet with fourth in the SxS Pro Production class. Flores rallied from tenth on lap two to the fifth spot on lap five. Flores made changes to his Maverick since the last round and the changes seemed to help him. He took over fourth on lap five.

“I just rode my own race. I stayed smart and hoped for the best. Hopefully we’ll get the box next time,” regarded Flores.

Point’s leader Beau Baron had the initial lead in the race, however he broke a ball joint half way through lap one. The issue put him out of contention and he was unable to finish.

Mitch Guthrie Jr. earned his fifth class win in the SxS Production 1000 class. Guthrie got the holeshot and grabbed the early lead. He ended up getting a flat tire and dropping to third position, but was able to come back and pass for the lead. He ended up taking the class win by nearly three minutes.

“The track was rough but once I settled down I was able to make a lot of progress. The RZR was working awesome and I am really happy to get another win,” said Guthrie.

Richie Laatz placed second at the round. This is Laatz’s best finish this season. Robert Mowrer rounded out the top three in the class.