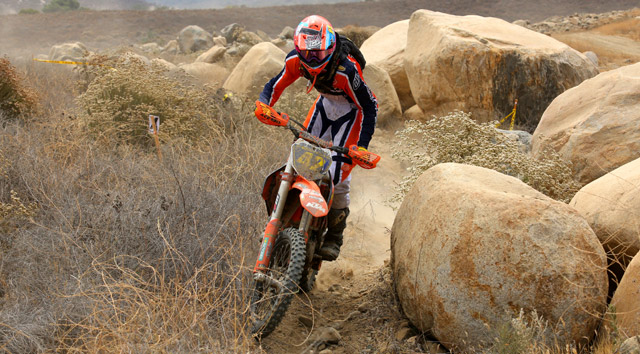 Pala, California – After a two month long summer break, the 2013 Rocky Mountain MC World Off-Road Championship Series presented by Motoworks and Dirt Bike Magazine was back in action at Pala Raceway California for Round six, and Moose Racing’s Bobby Garrison secured his first win of the year followed by Precision Concept’s Robby Bell and RPM / KTM’s Justin Jones rounding out the podium.

Bobby Garrison got off to a slow start after it took more than one kick to get his Kawasaki started, which had him leaving the line while most of the class was already battling for the lead in turn one. Garrison wasted no time working his way through the pack, and by the end of lap one, he caught Justin Jones in the lead. Early in lap two, Garrison took over the lead, which he held to the checkered flag to secure the win.

“Everything went pretty good for me today. I did not have that great of a start; I made quick work on the moto track. I caught up to Jones at the end of lap one and had a little battle with him on the moto track. I just tried to do my own thing. These guys rode really good today and pushed me to my limit. I wanted to back it down at times, but really couldn’t. I am pumped to get a win. I’ve been trying all year and finally got it,” said Garrison.

Robby Bell once again struggled to get his Kawasaki to start, and he got off the line just over ten seconds behind the rest of the class, but in true form, Bell charged his way through the field and into the fourth spot by the end of lap one and he finally made the pass on Jones to take over the second spot in lap five, but he was never able to challenge Garrison for the lead before settling into the second spot after a wreck late in the race.

“It was mayhem on the first lap. The new sections were awesome, but everyone was crazy just trying to figure it out. Guys were going left and right; I even crashed a few times. Finally around forty minutes in I was able to get into second. It was a good race with Bob; he was hauling butt today. I thought I was going to catch him and then he pinned it and laid down a few really fast laps. I tried to match it, but I couldn’t today. I crashed a few times and did as much as I could. Hats off to Bob and Justin. I am stoked on second. I really want to thank my team Precision Concepts, Alamo Alarms, IMS, FMF and everyone that helps me out,” said Bell.

Justin Jones once again claimed the final spot on the podium after holding down the lead in lap one, but his third place finish currently has Jones holding down the third spot in the points race behind Garrison and Bell.

“I had a good start on my RPM KTM. I tried to lay the pace down early; I ended up getting caught, but I was pretty stoked about all the off-road. It was a really good time. I definitely have to thank RPM KTM, Maxxis Tires, Spanaza Plumbing, FMF and my mechanic Robbie. Also all my friends and family that came out to support me! Look for me at the top of the box next time,” said Jones.

Justin Seeds made a run a Jones for the final podium spot, but ran out of time as he closed the gap, but he ran out of time before the checkered flag, but Seeds fourth place finish now has him just eight points behind Jones, which will make for an exciting points battle between Seeds and Jones in the final three rounds of the season.

All American KTM’s Starr Savage secures his first win of the year in the Pro 2 class, and he is also currently leading the points by a slim five points over Ty Tremaine who finished in the second spot at Pala Raceway followed by Brandon Prieto.

“Today started out rough, I had arm pump and was off pace for the first half. I started to calm down and began to reel those guys in. Eric had issues and I caught and passed Ty and had the win from there. My All American KTM worked awesome today. My bike was prepped perfect and ran like a charm all day,” said Savage on his win.

Pro 2 Lites class leader, Steve Gibson was back in action at Pala, and he claimed his fifth win of the year after missing Honolulu Hills to attend his prom. Tallon Newman and Tristen Morris rounded out the Pro 2 Lites Podium.