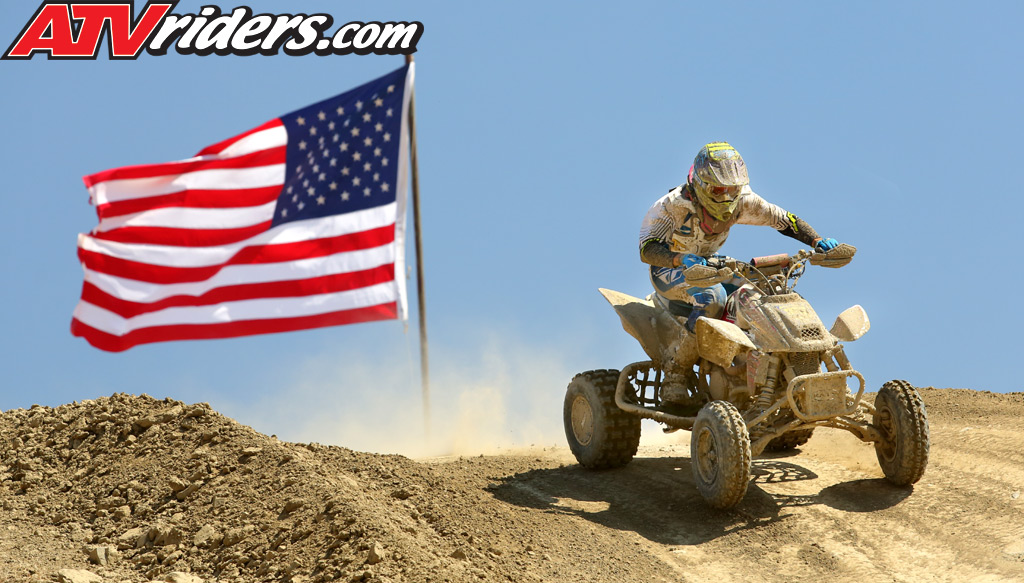 After a two month long summer break, WORCS racing resumed in southern California at Pala Raceway, and racers were greeted to better than expected temperatures for this time of the year with temps only in the upper 80’s with a nearly constant breeze, which also kept the track crew busy watering the track to manage the dust. The track utilized the national motocross track along with Tim Shelman’s off-road course, which included many obstacles including the “garbage pile” and “mine field” along with some high speed sections and plenty of rocks.

Maxxis’ Beau Baron was up to the challenge after getting a mid-pack start, he quickly charged his way into a battle for the lead with Yamaha’s Dustin Nelson by lap four. Baron finally took over the lead in lap six when Nelson was held up by another racer blocking his line.

“I had a mid-pack start, and was in fourth or so. I passed up to third by the second corner and began to push really hard to catch up. The dust was brutal once we got off the motocross track and I couldn’t get up to Robbie Mitchell. Eventually, I put a good pass on him on the motocross track; I had tried a few times, but it took a while to make it happen. It took me about another lap to catch Nelson. I got right on his bumper and as we approached a mogul section I noticed a kid stalled on a line. Nelson didn’t see him and took the line, I was able to go wide and get around him,” said Baron.

Once out front, Beau Baron remained unchallenged to the finish line to secure his fifth straight win, which extended Baron’s points lead to 14 points over David Haagsma in the WORCS pro championship battle.

Sparks’s David Haagsma claimed his fourth straight second place finish after coming from behind late in the race to charge his way up through the pack. With just four laps to go, Haagsma worked his way up from the fifth spot to the second spot on the podium.

“My quad started first kick and I had a decent start, I didn’t have any good lines in the second corner and I dropped back. Then midway through the first lap there was a split line and I took the right which turned out to be slower and a few guys got by me. I went from fourth to last a little later when Collins Webster stalled in front of me. I really had to work through everyone. It wasn’t easy; I wasn’t feeling comfortable, but I was able to get back up there. In the end, I had a great battle with Josh Row for second. It was a lot of fun. I got lucky today,” said Haagsma

Yamaha’s Josh Row secured his second podium finish of the year claiming the final spot on the box. Row got a great start in the second spot behind Nelson, but he quickly dropped back to fourth place before rebounding back into the second spot, but a late pass by Haagsma dropped Row back into the third spot before the finish.

“I got into second after Dustin (Nelson) got a flat part way through the race. I had a pretty good gap and then another racer got stuck in the tunnel right before the finish line. Davi caught up on me while I was stuck behind the racer and with him so close I got my heart rate up and I didn’t have anything for him,” said Row.

LMR Racing’s Robbie Mitchell battled with Beau Baron early on in the race while holding the second spot, but late in the race, Mitchell began experiencing issues with his quad, which slowed down his charge.   Once the race was over, Mitchell discovered his rear wheel was about to fall off, but he still managed to hold on to claim the fourth spot.

Yamaha’s Dustin Nelson grabbed the Holeshot and held the lead for several laps until he picked the wrong line and found himself stuck behind another racer, and Nelson then experienced a flat tire, which forced him to pit. Nelson attempted to recover his lost ground, but he hit a rock, which sent him flipping and bent his rear axle, which dropped Nelson back to the fifth spot.

In the Pro Am class, H&M Motorsports’ Grant Mitchell secured his first win of the year, which moved him within seven points of Bryce Peart in the points lead. Duncan Racing’s Levi Shirley secured the second spot followed by Kyle Grosse.