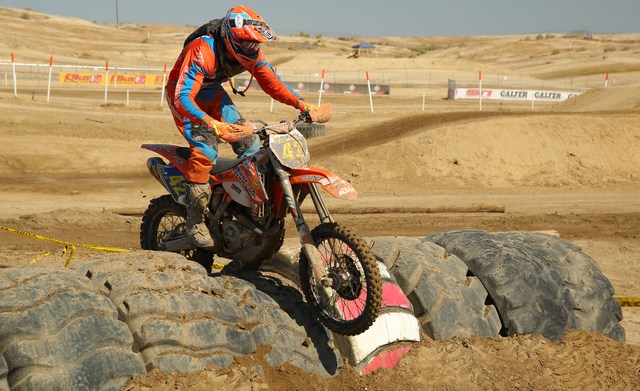 WORCS racers faced near record heat with temperatures reaching near triple digits on Sunday at Honolulu Hills in Taft, California, and the hot and dry weather conditions kept the water trucks busy in the off-road section of the track, and for the first time this year, there was a worcs-cross section, which added another challenge for the racers with many of the top pros going down atleast once over the water soaked logs.

Despite the brutal conditions, Kawasaki’s Robby Bell was up to the challenge even after mid-pack start, but he quickly charged his way through the pack and caught Pro 2 class racer, Eric Yorba, who grabbed the Holeshot and lead the first lap, but in lap two, Yorba clipped a pipe along the pavement section of the track, which opened the door for Bell to make the pass and take over the lead.

“The race started out very exciting; I didn’t get a great start and had to come through everyone. Eric Yorba got the holeshot was riding really fast; at the top of the hill he hit a pipe that was sticking up and got real squirrelly on the asphalt. It was scary, but he pulled it off. I got by him and figured I would get into a pace, but once I got into enduro cross I got snagged a bit on the first log and then tried to double the second log and ended up clipping it and had a little get off. Once I got everything back together it was smooth sailing from there on,” said Bell.

Bell would go on to claim his third win of the year, which now has Bell holding a thirty one point lead over second place, Bobby Garrison, in the pro points race. “It feels awesome to get another win today. It feels good for me personally, but also for my team. Precision Concepts racing, Kawasaki, all my sponsors really help me out and I really appreciate it”, said Bell

Moose Racing’s Ryan Abbatoye claimed his first ever WORCS Pro podium with the second place finish. Abbatoye just missed the podium a couple of times in 2012, but everything came together for Abbatoye at Honolulu Hills when he made the pass on Justin Seeds in the worcs-cross section to take over the second spot, which he held to the checkered flag.

“I am pretty excited. It feels really good. I am happy to be up here and this is my first podium. I’ve had to miss a few races because of work and it just makes me feel good to come out here and run up front,” said Abbatoye.

RPM / KTM’s Justin Jones claimed his second podium finish of the year, “I overcame a pretty big sickness recently and to be back on the box is awesome. I am really happy with how today went. I want to thank my whole team, the RPM KTM team and everyone else that supports me; I really appreciate it,” said Jones.

Precision Concept’s Justin Seeds held the fourth spot for the majority of the race, and in the final laps he started to close the gap on Jones, but he was unable to make his move before Garrison joined in for the battle for the final podium spot.

Bobby Garrison got off to a rough start when he went down early in lap one after colliding with Pro 2 class racer that went down in front of him, but Garrison wasn’t about to give up as he charged his way into a battle for the podium in the final lap of the race by making the pass on Seeds and closing in on Jones before he suffered a mechanical issue, which dropped him back to fifth place finish.

RPM / KTM”s Eric Yorba grabbed the Holeshot and held the Pro 2 Class lead from start to finish to claim his fourth win of the year.

“I got the holeshot and led for the first lap and a half. I ended up hitting an exposed pipe at the top of hill. It got a little sketchy and let Robby (Bell) go ahead. I tried to just keep it going and ride a smart race. Around the hour mark they soaked the enduro cross section and everything was just soaked. I went down pretty hard trying to double a few of the logs. I ended up smashing my fingers pretty hard and then just cruised and was sure to be safe. I was going for the second overall, but was happy to just win my race. I wanted to ride my own race and focus on my championship,” said Yorba.

Starr Savage and Ty Tremaine rounded out the Pro 2 podium for a KTM sweep.