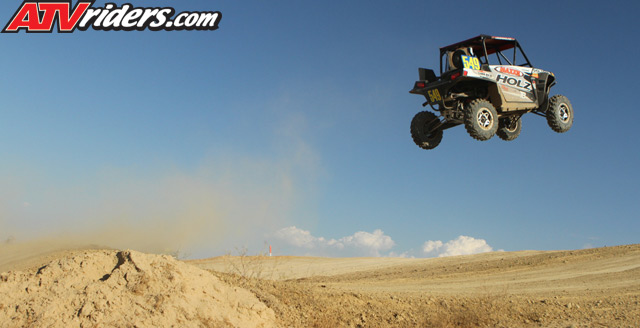 Taft, CA – The fifth round of the Rocky Mountain ATV MC WORCS Series took place at Honolulu Hills in Taft, California. The round officially marks the over half way point of the season and RJ Anderson put on another commanding performance to earn his second win in a row in the SxS Pro Production Class. His Holz Racing teammate, Beau Baron took a close second and Keenan Rogerson made his first podium appearance in two years to round out the top three.

With new record high temperatures, SxS racers faced dry and dusty conditions in the off-road and some high flying jumps on the motocross track. Twenty Pro SxS drivers took to the starting gate and only eleven were able to finish all five laps.

RJ Anderson had a lot of momentum and excitement built into him as he took to the gate at Honolulu Hills; Anderson won round four and was looking for a repeat in his Holz Racing backed Polaris RZR 900XP. Anderson grabbed the holeshot and took command of the brutal track. He led all five laps and crossed the finish just a hare in front of his Holz Racing teammate, Beau Baron.

“Today’s track was brutal. I got a ton of traction off the line with my GBC Tires and nailed the all-important holeshot. My RZR was running great; Holz built cars are flawless and Beau (Baron) and I proved that today. He was right behind me all day, we had an awesome battle. I am super stoked to get another win and couldn’t be happier with my RZR, my set up and my team,” regarded Anderson of his race.

Beau Baron put his H&M Motorsports / Maxxis Tires Polaris RZR 900 XP in the front mix of the race for all five laps. Baron was in second off the line and quickly paired up with Anderson as the two charged away from the rest of the class. Baron battled with Anderson for the entire race, but was unable to make a pass stick. He crossed the finish line in second, just 01.042 behind Anderson. Baron currently holds the points lead in the SxS Pro Production Class.

“The dust made visibility a bit difficult today. Overall though, we had a great race. RJ (Anderson) and I had an awesome battle and were really consistent all race. I tried to get around him a few times and would run super hard through some sections, but would end up blowing a berm or something and it wouldn’t pan out. My Holz Racing / Maxxis Tires / H&M Motorsports Polaris worked great and I am pretty happy with today,” said Baron of his race.

Keenan Rogerson gained his first podium in two years on his #418 Polaris RZR XP 900. Rogerson didn’t have the best start and had to work his way through traffic to gain contention for the podium. He worked his way through everything and was able to cross the finish in third.

“I am pretty pumped about this, I haven’t been on the box in a while and this third place feels pretty good,” regarded Rogerson from the podium.

Philip Martin and Andrew Berry rounded out the top five in the SxS Pro Production Class. This is Martin’s first WORCS race this season and he took his #122 Polaris RXR XP 900 from twelfth on lap one to fourth on lap five. Berry took fifth after getting a mid-pack start; and finished less than a minute off the pace of Martin.

In the SxS Production 1000 Class Mitch Guthrie Jr. took his fourth win of the season. Guthrie Jr. grabbed the holeshot and hit the first step up with everything he had. His early charge enabled him to pull away from the rest of the Production 1000 class. Guthrie admits dust was a factor, especially once he caught the Pro class, but was able to maintain his lead and win the class by an impressive 01:12.861. Interestingly, Guthrie pulled off the win with his hand in a cast after a wreck at the previous round.

“The race went pretty well. I had a great start and just pulled away from there. It was a little difficult with my hand in a cast, but I had four working fingers to put to use. All in all, it was a good day and I’m happy to get another win,” regarded Guthrie Jr. who currently holds the SxS Production 1000 class points lead.

Mike Gardner and Michael Camp rounded out the top three in the class. Gardner and Camp had a good battle with just twelve seconds separating them at the finish. The second and third were both Gardner and Camp’s best finishes this season.

David Haagsma raced his H&M Motorsports’ Polaris RZR 570 to his fourth win in a row in the Production700 class. Haagsma grabbed the early lead and didn’t look back. He crossed the finish 35:215 ahead of second.

Cody Rahders and Michael Bunyea rounded out the top three in the class. The top finishes will boost Rahders in the points chase and further tighten the battle for the number one spot between Bunyea and Haagsma. Only seven points give Bunyea the edge over Haagsma heading into round six.

Round six of the Rocky Mountain ATV MC Series will take place July 12th – 14th at Pala Raceway in Pala California. The event will be packed full of racing excitement at the battles for championships heat up all around and racers fight for points. It will be exciting to watch as Beau Baron pushes his Holz Racing Polaris for his first SxS Pro Championship and Mitch Guthrie Jr. looks to further boost his points lead. Also will David Haagsma be able to make it five wins in a row? Time will tell when the gate drops after a two month long mid season break..