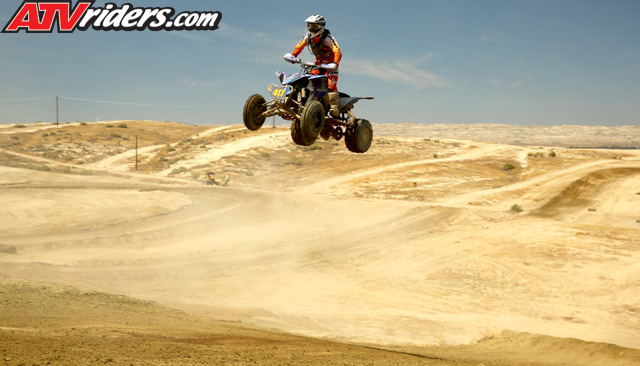 Round five of the WORCS series was held at Honolulu Hills, and even though it was early May, it felt more like late July with temperature reaching near record highs with a high of 97 degrees on Sunday at the start of the Pro ATV Main event. With the brutal heat, the race length was cut to ninety minutes, which didn’t come soon enough for many of the racers. For the first time this year, the worcs-cross section was added to the course with tires and logs to challenge to the racers.

H&M Motorsports’ David Haagsma grabbed the holeshot followed by Yamaha’s Dustin Nelson with David’s teammate, Beau Baron in chase. Haagsma would initially pull away from the field as he build a lead of nearly twenty seconds on second place.

Sparks’ Baron would make the pass on Nelson when he lost his seat in lap one, and Baron began his charge on Haagsma as he turned the fastest laptime of the race in lap three with a time of 09:36.378. Baron would finally reel in Haagsma in the off-road section in lap five and make the pass for the lead. Once out front, Baron would go unchallenged as he went on to claim his fourth win of the year and extend his points lead to eleven points over Haagsma.

“It was all I had to get around David and I knew that I had to do it soon. I was just sucking dust like a mad man and holding on through holes that you couldn’t see. I did the best I could to get buy him and I’m sure glad that I did, and it feels good to win a race,” said Baron.

Maxxis’ Haagsma would settle in the second spot, which he held to the finish for his fourth podium finish of the year. “My Honda started first kick and I used my Curtis Sparks Racing engine to get the holeshot. I powered right by everyone. I took off and tried to go as fast as I could. I knew it would be really dusty and muddy and getting out front was crucial. Once I saw Beau (Baron) in second I started rolling as fast as I could to get away from him. He eventually got on my bumper and get by me in a corner. Then I knew third place was far behind me and rode my own race and settled with second. Going one two isn’t bad, I don’t like getting second all the time but I’ll take it for this weekend,” said Haagsma.

FOX’s Nelson lost several spots early in the race when he lost his seat, but Nelson was on a mission as he charged his way back up through the pack to claim the final spot on the Podium for his first WORCS podium finish of the year.

“I am stoked to be on the podium, this is the first time all season. It was a tough race; I got a good start, but then my seat fell off on the first lap. I had to pull off and put it back on. Once I got going I was way behind the pack and it was nasty conditions to come from behind. It was really dusty in some spots and super muddy in others. I was just blowing through tear offs and my Yamaha started to overheat, but me and my Yamaha didn’t give up. It ran strong and I pushed hard all the way to the end,” said Nelson.

Yamaha’s Josh Row made a run for a podium finish, but he had to settle for the fourth spot with Nelson making the pass for the final podium spot. “Last weekend I had a pretty bad get off and bruised my ribs. They still hadn’t healed from before, so with two laps to go I started to make mistakes and I ended up losing a position. The heat added to the roughness of the track; the canyons were the worst. It was like breathing in fire as I rode through them,” said Row.

LMR’s Robbie Mitchell held the third spot early on in the race, but his airbox came lose, which forced him to the pits and dropped him back to the sixth spot before gaining a spot in the final laps to round out the top five.

Can-Am / GPR Off-road’s Dillon Zimmerman charged his way into the third spot late in the race, but he ran his foot over after his nerf bar nets broke, which sent him back several spots with just two laps remaining in the race.

In the Pro Am class, Lonestar Racing’s David Flores claimed his second straight win of the year with H&H Racing’s Bryce Peart and Duncan Racing’s Levi Shirley rounding out the podium.