Robby Bell Back on Top at Sand Hollow WORCS 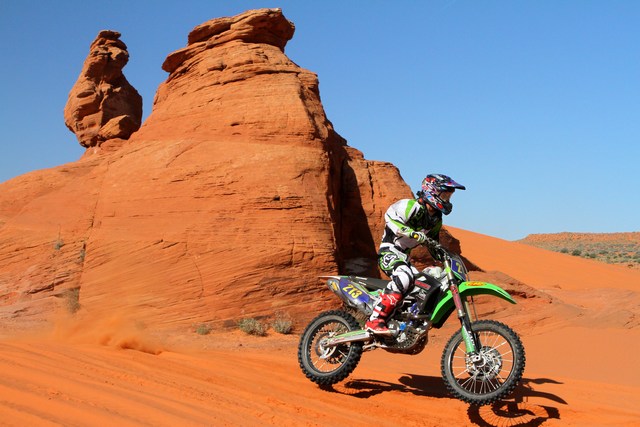 Round four of the WORCS series was held at the scenic Sand Hollow State Park in Hurricane, Utah, which was the first ever race held at park. Although, Sand Hollow isn’t new to off-road enthusiast as hundreds of riders coming out daily to ride the sand dunes, slick rock, and miles of desert trails, which has some of the most scenic views of any public riding location in the country, but this weekend, it was reserved for an epic WORCS event, which featured the WORCS series longest ever course at over 13 miles.

With the extended length of course, the Pro Main for the Motorcycles and ATV racers were combined in the morning for a 9:30AM start with the Motorcycles starting first followed by the Pro and Pro-Am ATV classes.

Pro 2 class racer, David Broderick, grabbed the holeshot followed by Argubright, but Bell make quick work of the pair as he charged his way into the lead early on in lap one. Bell would remain unchallenged as he went on to claim the easy the win.

“I had a two kick start, which was a bummer because I have been feeling pretty good about my dead engine starts. Within a few miles of the race, I caught up to the 214 (Broderick) and made the pass for the lead, and from there it was a smooth ride. I was just focusing on my own lines and having fun with it. I had a little burning in my back from all the deep sand whoops but other than that it was smooth”, said Bell.

Kawasaki’s Jacob Argubright scored the second spot on the pro podium with an impressive run at Sand Hollow State Park. Argubright typically races at least one WORCS race a year as he focuses his attention on the Hare & Hound series where is currently in a battle for the championship with Kurt Caselli, but he has never been a podium threat in the WORCS series until this weekend when Argubright launched off the line leading pro the class. Bell would make the quick pass, but Argubright would hold onto the second spot till the checkered flag for his first ever WORCS pro podium finish.

“I came up here for the dunes because I have a Hare and Hounds race coming up in Delta, Utah, which is really sandy like this, so I did some testing this weekend, and I wanted to hang out with my girlfriend and have some fun, said Argubright.

Precision Concept’s Justin Seeds made his pro podium debut in the third spot, and the prior to Sand Hollow, Seeds best finish in his rookie year was sixth place, but Seeds was right at home in the sand as he charged his way past Bobby Garrison to secure the final spot on the podium.

“It’s a huge deal to get a pro podium. My team, Precision Concepts, and my teammate, Robby Bell, have really stuck behind me. I am glad they believed in me and helped get me up here. It’s a good confidence booster to get up on the podium,” said Seeds.

In the Pro 2 class, KTM’s Eric Yorba was back on top after a nasty crash at round three ended his winning streak. Yorba not only won his class, but he finished an impressive third overall. KTM’s Ty Tremaine finished in the second spot for a season best, and Broderick claimed the final spot on the podium for his third podium finish of the year.

WORCS racing resumes in just three weeks on May 10-12th at Honolulu Hills in Taft, California for round five of the series.