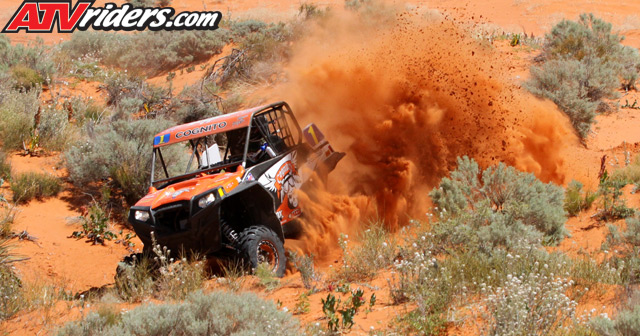 The track was brutal and featured huge whoops, slick rock and massive sand dunes. The racers only had to complete two laps on the extra-long 13 mile track, so help from the pits and spectators was few and far between. Twenty two racers took to the starting line to complete in the Pro Production SxS class. Interestingly the series decided to run all of the SxS together due to the long length of the track; all together nearly 60 SxS’s tackled the gnarly terrain at Sand Hollow.

Anderson hasn’t finished a race since round eight of last season, but left all of his bad luck behind and took a commanding win on the brutal sand track. He grabbed the win on his Holz Racing backed Polaris RZR 900 XP by nearly 30 seconds over Ryan Piplic. Anderson completed the two gnarly laps in 55:53.231.

Ryan Piplic raced his Cognito Motorsports RZR to a second place finish after and interesting two laps. Piplic was late getting to the gate and ended up starting on the outside. He was third out of the second turn and the quickly took over the lead. He did get stuck once and was passed but quickly regained the physical lead. Piplic then blew his rear shock midway through the first lap and broke his axle just a few miles before the finish. He lost some ground, but was able to earn second overall.

Beau Baron rounded out the top three on his H&M Motorsports Polaris RZR 900 XP. Baron was rolling well until another racer tried to pass him in a single line section. Baron’s RZR took a good hit to the front end before the challenging SxS flipped over. Baron was worried that he had damage to his front end and went into survival mode for the remainder of the race. He was able to finish third, and continue to hold the points lead in the SxS Pro Production class.

The # 68 of Nic Granlund placed fourth in his Polaris RZR just 30 seconds behind Baron. This is Granlund’s best finish of the season. GBC Tire’s James Hill rounded out the top five in the Pro Production SxS Class on his Can-Am Maverick.

Brent Fox earned his first win of the season in the SxS Production 1000 class. Fox bested the class by nearly three minutes and earned fifth place in the overall standings. Tanner Godfrey and Richie Gainer rounded out the top three in the class.

In the SxS Production 850 class, Alfredo Ramirez earned his second win of the season on his Polaris RZR. Ramirez won by nearly a minute and thirty seconds. Justin Lambert raced his Kawasaki to second and just barely edged out John Deere’s Daniel Rosenweig. Lambert and Rosenweig finished with just .734 separating them.

David Haagsma raced his H&M Motorsports Polaris RZR 570 to his third win of the season and finished an impressive sixth overall. Haagsma won the SxS Production 700 class after an intense battle with Mike Bunyea. Bunyea crossed the finish just three seconds behind Haagsma. Matt Hancock rounded out the top three in the class.

The fifth round of the Rocky Mountain ATV MX WORCS will take place in three weeks in Taft, California. The event will be at Honolulu Hills and the racing action is sure to be epic as Beau Baron attempts to regain his spot in the middle of the podium and the points chase gets even tighter as the season approaches the half way mark.