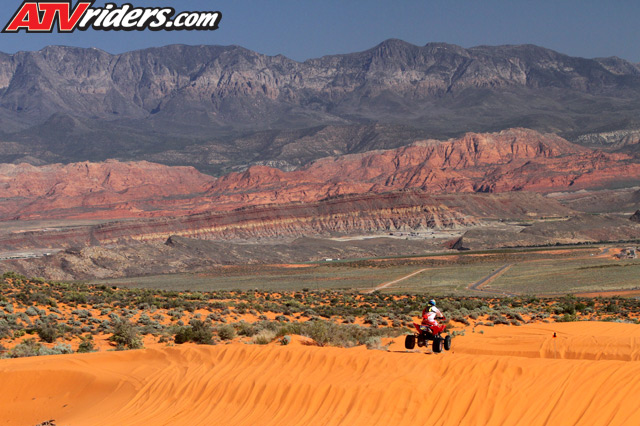 Round four of the WORCS series was held at the scenic Sand Hollow State Park, which was the first ever race held at park. Although, Sand Hollow isn’t new to off-road enthusiast as hundreds of riders coming out daily to ride the sand dunes, slick rock, and miles of desert trails, which has some of the most scenic views of any public riding location in the country, but this weekend, it was reserved for an epic WORCS event, which featured the WORCS series longest ever course at over 13 miles.

With the extended length of course, the Pro Main for the motorcycles and ATV racers were combined in the morning for a 9:30AM start with the motorcycles starting first followed by the Pro and Pro-Am ATV classes.

LMR’s Keith Johnson grabbed the Casey Johnson 312 Memorial Holeshot Award followed by Maxxis’ David Haagsma and Yamaha’s Dustin Nelson, but just a short time into the race, Haagsma would take over the lead, but he wouldn’t be able to hold on to it for long with Sparks Racing’s Beau Baron charging past Haagsma early on in lap one.

Defending WORCS Champion, Baron, got off to a slow start with him taking several kicks to get his Honda started in gear, but he didn’t waste any time making his way through the pack and into the lead in lap one, but wasn’t alone with Haagsma chasing after his shadow for several laps before Baron was finally able to pull away from Haagsma. Baron would go on to claim the win after the five lap race that latest over two hours long with lap times averaging around 25 minutes long.

Elka’s David Haagsma held the early lead before Baron was able to make the pass, and Haagsma challenged Baron for several laps until he lost his rear brakes, which were critical on the rough and sandy course. Haagsma was forced to slow down and play in safe in the final laps to maintain the second spot, which he held to the checkered flag.

Can-Am’s Dillon Zimmerman has had his fair share of issues this season finishing at or near the back of the pack at every round till this weekend. Zimmerman was a mission from the beginning as he quickly charged his way into the third spot and held it to the checkered flag for a podium finish, which he dedicated to Josh Frederick, who is currently in rehabilitation.

Yamaha’s Dustin Nelson and Josh Row finished just over a minute apart as they rounded out the top five among the pro class.

In the Pro Am class, Lonestar Racing’s David Flores grabbed the Holeshot and held the lead to the checkered flag to secure his first win of the year

WORCS racing resumes in just three weeks on May 10-12th at Honolulu Hills in Taft, California for round five of the series.