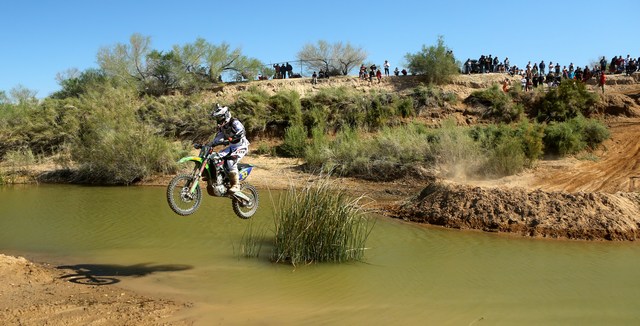 Justin Seeds grabbed the holeshot, but Robert quickly made the pass to take over the lead before turn two with Bell also quickly moving into the second spot to challenge Robert, but the track belonged to Robert as he gradually pulled away from Bell and took the checkered flag with a two minute lead over Bell.

“Sand is my forte. I was in my comfort zone all day. I came out in first after the turns and never looked back. I rode my race all day and kept extending my lead ever lap, and think I won by about two minutes. It’s my third year in row winning here, so I really like this place,” said Robert on his win.

Bell attempted to challenge Robert for the win early on, but after a few laps, Bell settled into the second spot and rode his own race as he remained unchallenged for the duration. Bell went on to secure his third straight podium finish of the year in the second spot, which extended his points lead to thirteen points over Gary Sutherlin.

“The start went really well. I followed Taylor right though. I wanted to have an epic battle, but Taylor was just really clicking off the laps today. I had a blast; I can’t be disappointed at all. I rode my own race. I cleared the lagoon each lap and just had a lot of fun,” said Bell.

Metcalfe secured the final spot on the podium in his surprise appearance at the WORCS race. Metcalfe hasn’t raced since breaking his tibia at Glen Helen AMA Motocross National last year, but you couldn’t tell by the way he raced this weekend. Metcalfe charged his way from a near last place start to challenge Bobby Garrison for the final spot on the podium in the fourteenth lap. After battling for a few laps, Metcalfe made the pass stick to take over third, which he held to the finish.

“It was one of the toughest tracks; I’ve raced here in 2006 and enjoyed it but I’ve never been here since then. I had the opportunity to come out and do it again. I am trying to get back in shape and what better way to spend two hours on your dirt bike. I was a really good time,” said Metcalfe.

Once again, Bobby Garrison just missed a podium finish claiming the fourth spot for the third straight time this season, which currently has him third in points. “Race went pretty good, I just ran out of steam at the end. I was trying to hold off Metcalfe so I could get on the podium but he had more than me today. I tried to keep him behind me but once he got around I really didn’t have anything for him and fell off pace,” said Garrison.

In the Pro 2 class, Cody Schafer claimed his second straight podium finish with the win with Starr Savage and David Broderick rounding out the podium. Eric Yorba’s win streak ended when he went over the bars in lap four, which ended his early charge in the second spot.