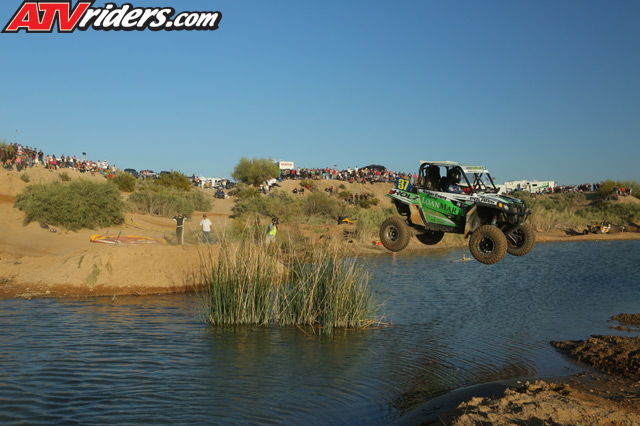 The track was a mix of sand and gravel; racers dealt with extreme track conditions and winds gusting over twenty miles per hour. Aside from the gnarly track, there was also a tricky water section which drivers had to carefully navigate through or around.

Twenty five racers took to the starting line in the Pro Production SxS class. Sparks Racing’s Beau Baron grabbed the early lead in the class and led the race until lap five. Baron quickly got into a time adjusted battle with RJ Anderson. He turned the fastest lap of the race on lap five; Baron clocked a 06:46.494. Baron maintained control until the sixth lap when he had a mechanical issue that sidelined him in the final lap.

RJ Anderson started several rows back, but with time adjustment he was challenging Baron for the lead, and Anderson was making up time with each lap by doing the Lagoon jump, and he was the only SxS racer besides Doug Eichner to attempt the jump with Anderson doing it every lap. Unfortunately for Anderson, he all also experienced mechanical issues in the final lap that took him out of the race, and he wasn’t alone as Ryan Piplic and Josh Frederick also broke in the final lap as they were also all running for podium finishes, so with all the front runners out of the mix, it opened the door for some new faces on the podium at round three.

The multiple mechanicals allowed for new drivers to take over the top spots. Vanbeekum had been running in fourth and was boosted to second place physically for lap six. Vanbeekum put on a charge and finished first on adjusted time.

GBC’s James Hill finished first on the track, but earned second overall on adjusted time. Hill got a mid-pack start on his Can-Am Maverick 1000r; he was fifth off the first lap. Hill pushed had the entire race and got into third for laps two through five before he took over the physical lead on lap six. “This is my best finish yet; I drove my Maverick hard and concentrated on keeping it together. It was a great race,” said Hill.

Holz Racing’s Mitch Guthrie Jr. raced his Polaris RZR XP 950 to his third straight SxS Production 1000 win. He got off the gate in good in good position and was in fourth at the end of lap one. He took over the lead on the second lap and bested the rest of the 1000 class by 01.07.374. Guthrie also pulled off the fastest lap of the day with a 07:10.847.

Jake Morton and Sara Price put on an exciting race in the Production 850 class. Morton got the early lead but was caught by Price on the fourth lap. Price, who was racing her first SxS race, put in the fastest lap of the day on lap three, an impressive 08:00.338. After catching Morton she staying right with him and crossed the finish just 07.162 behind him.

In the SxS Production 700 class David Haagsma raced his H&M Motorsports Polaris RZR 570 to his second win in a row. He battled with Cody Rahders early on, but Rahders was sidelined with mechanical issues. Haagsma put in the fastest lap of the day, a 07:29.990 on lap three. He continued his charge and won the class by 18.137.

Round four of the Rocky Mountain ATV MC WORCS SxS Series will take place April 19th at Sand Hollow in Hurricane, Utah. The location is all new to the WORCS and will make for an exciting weekend of racing.