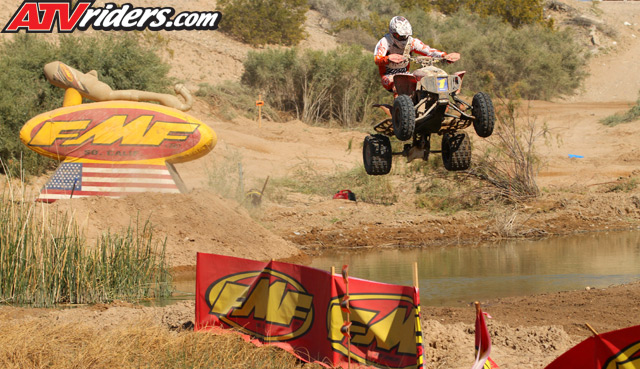 Lake Havasu City, AZ – Nine Pro’s took the line at round three of the Rocky Mountain ATV MC WORCS series presented by Motoworks and Dirt Wheels Magazine at the Crazy Horse Campground in Lake Havasu City, Arizona. H&M Motorsports’ Beau Baron made it two in a row by taking the win over his teammate David Haagsma. Robbie Mitchell rounded out the pro podium.

The WORCS Super Event took place on a great weekend with temperatures resting in the mid 80’s for Sunday’s race. The track was a gravel and sand mix that was extremely rough by the time the ATV’s took the starting line. Aside from a gnarly track, there was also a tricky lagoon jump that the racers had to navigate.

Defending WORCS Champion, Beau Baron added to his points lead as he crossed the finish line an impressive 1:23.979 ahead of the rest of the field. Baron started his race by making the pass on Robbie Mitchell and moving into second place behind Dustin Nelson. Nelson wasn’t about to give up the lead easily as Nelson shut down several pass attempts before Baron was able to make the pass stick for the lead, and Baron went unchallenged for the rest of the race as he went on to claim the win with over a minute to spare on his teammate, David Haagsma. Baron’s win is his second of the season, and first ever win at Crazy Horse Camp Ground. He currently holds the points lead with 5 points over teammate David Haagsma.

H&M Motorsports / Maxxis Tires’ David Haagsma placed second on his Honda 450R ATV at WORCS Round 3.Haagsma got a rear pack start and was in fourth at the end of the first lap. Haagsma put on a hard charge and pushed his way to second place by lap three, although he had an intense battle with Robbie Mitchell and Dustin Nelson to get there. “It was a great weekend; I got the win in my RZR and got on the box with my Honda. It’s great to finish H&M 1-2 for the weekend; it’s exactly what we want to do,” said Haagsma of his weekend.

Robbie Mitchell earned his second podium of the season aboard his LMR / Exit Shocks Honda. Mitchell got off to a good start and quickly moved into second with Baron applying the pressure. Mitchell dropped to third at the end of the first lap. He began a back and forth battle with Dustin Nelson on the second lap. The battle was close and rough roost seemed to be the only thing that could separate the pair. Mitchell’s third place finish puts him in a solid third position in the points chase. He was satisfied with the way round three played out and is looking forward to round four. “My Honda was working awesome, I was worried about my set up, but it was great. I am excited to head to round four,” regarded Mitchell.

Yamaha’s Dustin Nelson grabbed the holeshot and charged to hold the lead for the first lap. “My Yamaha started and just took off! My Pro Tech motor pulled me to the first turn ahead of everyone and I just kept it out front for as long as I could,” said Nelson of his holeshot.

Nelson, who was coming off an injury he sustained last week, battled with Baron for the first lap of the race. He then battled with Haagsma, really making him work hard to take his position. On lap three Nelson was in third place and got into a back and forth battle with Mitchell.

Yamaha’s Josh Row rounded out the top five for the day. Despite a solid finish, Row admits this was one of the worst races of his career. Before the start, after he finished the parade lap, Row’s Yamaha was being topped off and his dry brake stuck open causing a few gallons of race fuel to be poured over him and his Yamaha YFZ450R ATV. The officials held the flag for three minutes to allow Row to run to his pits and change all of his gear.

Once the race was underway, Row began to battle with Collins Webster. Row was running in eighth place for the first two laps. On the third lap, Row came across a fellow racer and one of his idols. “I saw Josh’s (Frederick) Can-Am in the middle of the track and he was lying on the track and no one was around. I asked him if he was ok, he said no so I began motioning for the paramedics,” recalls Row.

After help arrived, Row continued his race. He caught back up to Webster and not long after catching him, he was struck in the face with a rock. The rock bloodied his nose and busted his goggles. “It was a rough race; after seeing Josh (Frederick) I wasn’t there mentally. The fuel spill and rock just made it worse,” regarded Row.

Can-Am’s Collins Webster earned sixth for the race. Webster was last off the start and soon began to catch the pack and make passes. “The first half of the first lap went well and then I fell off pace. I was struggling for most of the first hour,” said Webster. He was able to pick up his pace on the brutal track and finish out in sixth. Webster currently holds sixth place in the points chase.

DWT / Motoworks Josh Frederick had a tragic end to his race. Frederick got off to a mid-pack start and was clocking solid laps as he battled with Haagsma, Mitchell and Dillon Zimmerman. Frederick was on the motocross track on lap three when he landed in a rough hole after a jump. The landing sent him into a wreck leaving him on the track and his Can-Am in the middle of the course.

Frederick was transported to a Las Vegas Hospital and it has been reported that he has a serious back injury, so we send our thoughts and prayers to Josh and his family.

The Rocky Mountain ATV MC WORCS series will continue April 19th at Sand Hallow in Hurricane, Utah. The location is all new to the WORCS series and the racing is sure to be exciting as the mid-way point to the series approaches.