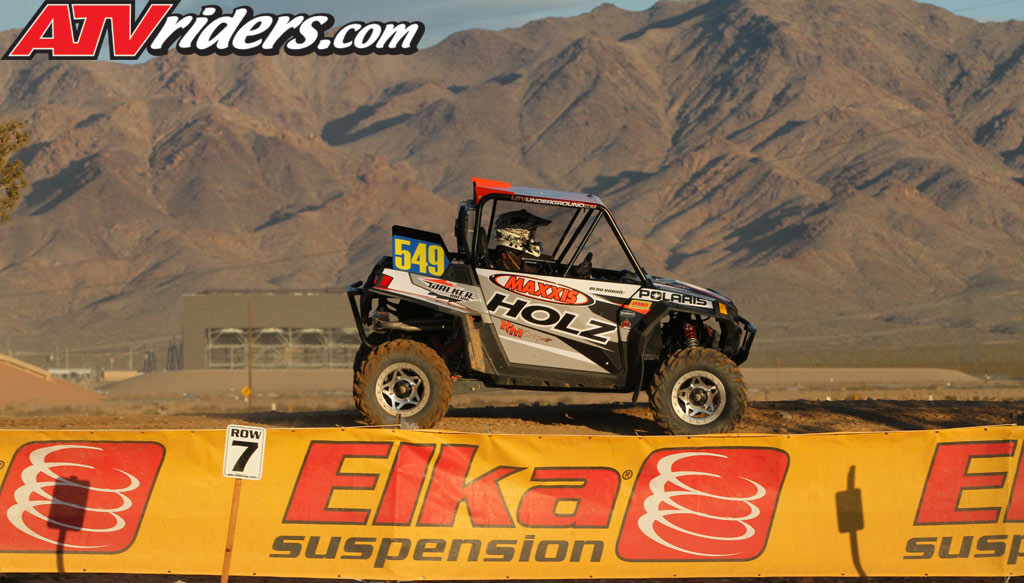 Primm, NV – Brutal track conditions and unseasonal cool weather greeted the SxS / UTV drivers as they lined up for round two of the Rocky Mountain ATV MC WORCS SxS Presented by Motoworks & Dirtwheels Magazine Series. Beau Baron proved his round one win wasn’t a fluke as he once again took the checkers for the win in the Pro Production SxS class. He was followed by reigning SxS champion Ryan Piplic and Josh Frederick.

Once again, there was a huge turnout with 64 SxS entries, so on the parade lap, all the SxS lined up along a sweeping turn on the trophy truck course for a CJ6 WWII airplane fly over.

Twenty three racers lined up for the second round of the Pro Production SxS class and Beau Baron used his Sparks Racing engine to grab his second holeshot of the season.

Holz Racing’s Baron faced a little trouble on the second lap when his sway bar snapped and he had to back off the throttle to ensure his RZR kept together. “I had to back it down so I wouldn’t break my RZR, but a few laps from the end everyone was pointing at their wrists letting me know that someone could beat me on time adjustment. As soon as I knew that, I pinned it. The second to last lap, I went pretty fast and the last lap I gave it everything I had,” regarded Baron about his race.

Cognito Racing’s Ryan Piplic started his race on the third row, so he has his work cut out for him as he worked his way through traffic to make up time on the leaders, and by lap four, Piplic had moved into the time adjusted lead over Baron, which made for an exciting dash to the finish, but in the final laps, Baron was able to pull away, and Piplic finished in the second spot just 25 seconds behind Baron.

Can-Am’s Josh Frederick piloted the new Can-Am Maverick 1000R to its first podium finish. Frederick started on the fifth row, which forced him to work fast to catch the lead pack. Working through traffic was difficult as much of the track was single lined and brutally rough. The Nevada racer didn’t let that stop him as he claimed the final podium spot with over a minute to spare on fourth place finisher, Blingstar’s Clint Roberts.

The SxS Production 1000 class also had a dramatic battle for the lead with #751 Mitch Guthrie grabbing the holeshot on row one, which had Guthrie holding the physical lead from start to finish, but #191 Jacob Shaw had taken over the overall lead for several laps time adjustments, but in the end, Guthrie was able to claim the win by a slim margin of just under four seconds.

David Haagsma made his mark in the SxS Production 700 class by taking his first ever SxS win aboard his H&M Motorsports backed Polaris RZR 570. Haagsma chose to sit out round one due to the undesirable conditions but came back with vengeance in his first ever race as a SxS driver to claim the win

The SxS’s will line up to battle in a few weeks at Crazy Horse in Lake Havasu City, AZ. The action is sure to be exciting as Beau Baron fights to fend off Ryan Piplic, Josh Frederick, Clint Roberts and others in the battle for the first ever Pro Production class Championship.