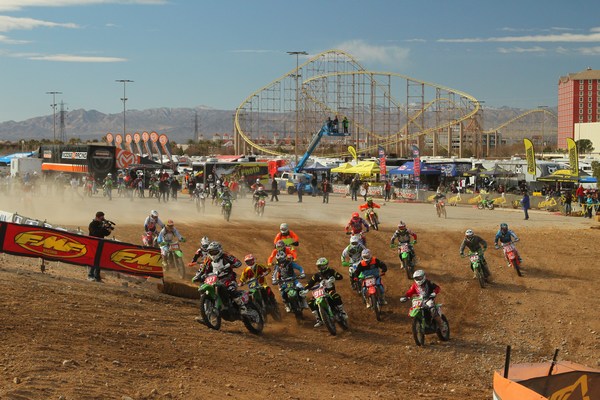 The reigning champion and round one winner, Taylor Robert, was missing from the lineup due to a stomach illness which forced him to stay home since he could barely get out of bed on Friday, but with absences of Robert, it opened the door for a new WORCS Pro class winner for the first time since May of 2012 with Roberts win streak ending at five straight race.

The Pro and Pro 2 class had a combined start, and Pro 2’s Precision Concept’s Tyler Renshaw grabbed the holeshot followed by Pro 2’s Cody Schafer, and Pro class racer, Ryan Abbatoye , came off the line in the third spot.

Bell was ready to pounce on the opportunity after finishing in the second spot at the season opener behind Robert, so Bell wasted no time working his way into the lead early in lap one, and once out front, Bell ran away from the rest of the field to secure his first WORCS Pro class win. With the Win, Bell also jumped into the points lead with 47 points with Robert dropping down to seventh place after missing round two.

Gary Sutherlin was in a back and forth battle with Bobby Garrison early on in the race as the pair swapped positions several times, but by lap seven, Sutherlin made the pass stick on Garrison to take control of the second spot, which he held to the checkered flag. For Sutherlin, it was his second straight podium finish to kick of the year, and it also was a career best finish for the privateer racer, which also boosted Sutherlin up into the second spot in the points race just five points behind Bell.

Pro rookie, Justin Jones, got off to a slow start, but as the track deteriorated, Jones continued to charge. By the eleventh lap, Jones made the pass on Ryan Abbatoye to take over the final podium spot, but he wasn’t alone as Garrison made a late race charge to close the gap on Jones to less than two seconds by the checkered flag, but Jones held on to secure his first WORCS Pro podium finish.

RPM / KTM’s Eric Yorba would once again charge his way into the lead to secure his second straight Pro 2 class win followed by Tyler Renshaw and Cody Schafer joining him on the podium.

In the Pro 2 Lites Class, John Burr Cycle’s Steve Gibson claimed his second win of the season with Clint Miglia and Dylan Osborne once again rounding out the podium.

Round 3 of the WORCS Series is set for Lake Havasu, Arizona on March 15-17th, which is just over a month away, so be sure to come out for another exciting round of WORCS racing.