Posted on October 9, 2012 by Podium Promotions Leave a comment 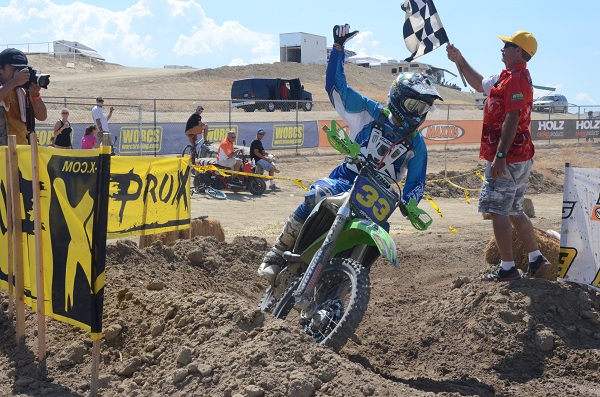 Monster Energy Kawasaki’s Taylor Robert capped his first WORCS Pro Championship by winning both races in the final round this weekend in Taft, California. Robert faced challenges from JCR/Honda’s Timmy Weigand, RPM/KTM/FMF/Maxxis’s Josh Strang, Team-mate Bobby Garrison, and privateers Robby Bell and Ryan Abbatoye, but TR33 was clearly the class of the field setting fast laps and leading almost from flag to flag.

“I’ve been working towards this title for a long time and it’s been my dream to be the WORCS Champion, and I can’t thank the team and all my sponsors enough,” said Robert. “It’s been a great season for me and the Monster Energy Kawasaki team. Together we’ve won seven of the ten rounds and when you add my team-mate Bobby Garrison’s victories with mine, Kawasaki won nine of the ten rounds.”

Weigand was one of the few who could keep Robert in sight, cutting quick laps and closing on Taylor early but never getting close enough to make a pass in race #1. Then in race #2 Weigand found himself in a battle with Strang, Abbatoye, and Bell with the three rider string swapping second to fifth place many times over the 90 minute final. Weigand earned second overall with a 2-3 performance.

Josh Strang took the third spot with a 4-2 weekend, showing good speed in the 100-plus degree heat at Taft to come from way back to take second in race #2. Ryan Abbatoye garnered fourth overall with a 3-5 outing. Abbatoye holeshot the first race and held off Robert for a lap before falling into a race-long battle with Weigand over the second place slot. Then in race #2 Abbatoye swapped positions with Weigand again, as well as Strang and a tough battle with Bell for the season’s Top Privateer Award. Abbtoye lost the battle with Bell on the last lap, taking fifth in race #2 to Bell’s fourth in #2 which earned Bell the TP award by three points.

At season’s end, Robert dominated the WORCS Championship with seven wins earning 456 points to take the WORCS premier title. Teammate Bobby Garrison won two races and garnered 351 points for second in the title chase. Third fell to Bell who put on a late season charge earning multiple podiums and 311 points, just a bit ahead of Abbatoye in fourth with 308. The only other rider to win a WORCS Pro race this season was KTM/FMF’s Mike Brown (winner round two at Primm, NV) who dropped out of the series in Mid-season to fill-in for an injured Kurt Caselli in Baja. Robert led the point’s chase from start to finish and dominantly claimed his first major off-road Championship and will proudly run the #1 WORCS plate next season.