Posted on September 9, 2012 by Podium Promotions Leave a comment 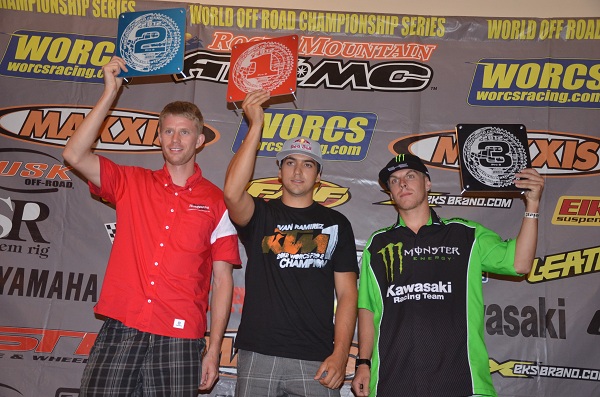 Justin Jones (742) won the Pro 2 class after pulling a massive holeshot in the combined Pro/Pro2 gate.

Jones held off charges from RPM/FMF/KTM/Maxxis’s Ivan Ramirez and Justin Seeds to take his fourth win of the season.

Ramirez (450) took second place and clinched the WORCS Pro 2 Championship in the process.

Ramirez won the Pro 2 title with 207 points via two victories and consistent podiums.His closest competition all season long was Husky’s Corey Graffunder and Honda-mounted Jones. Graffunder finished seventh in Taft and second in the points chase with 185/2 wins, Seeds was third for the title hunt with 169/1 win and Jones fourth with 164/4 wins.

Ivan Ramirez celebrates the WORCS Pro 2 Championship with his family and the RPM/KTM/FMF/Maxxis Team.