Posted on August 12, 2012 by Podium Promotions Leave a comment 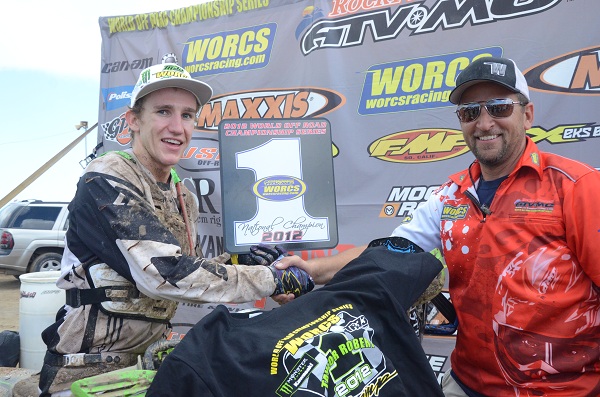 After nine rounds of the World Off Road Championship Series (WORCS), Monster Energy Kawasaki’s Taylor Robert clinched the 2012 WORCS Championship by sweeping both races this weekend at Cahuilla Creek MX in Anza, Calif. The victory was Robert’s sixth overall win of the season and earned him enough points to wrap up his first WORCS Pro class championship over teammate Bobby Garrison with one round remaining.

“It feels incredible,” said Robert. “I’ve worked really hard to get this title, and it means even more because I was so close last year. To win as many races as I have this year, I couldn’t have done it without everyone at Monster Energy Kawasaki. I can’t thank everyone enough.”

Garrison (4) rode hard but injuries kept him from seriously challenging Robert as he finished fifth at round nine for a season total of 335/2 wins, making it impossible to catch Robert even with the final round remaining next month.

Timmy Weigand took second overall.
JCR Honda’s Timmy Weigand went 2-3 for second overall ahead of Robby Bell 3-4 for third overall. RPM/KTM’s Josh Strang stepped up in Sunday’s rain race to finish second for a score of 8-2 and fourth overall for the round. Fifth went to the injured Garrison.