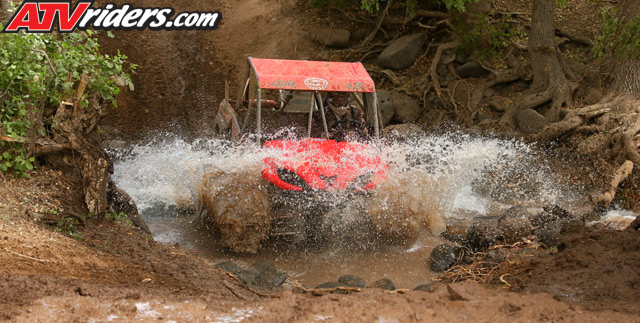 Enterprise, UT – In the SxS Production 1000 Class, Sparks Racing’s #549 Beau Baron secured his first win of the season at On The Edge Raceway in his Polaris RZR XP 900. Baron has been a contender for the win at several rounds this year, but a clogged radiator has caused over heating issues, which he solved for Round 6 of the WORCS Series.

Hiper Racing’s #122 Phillip Martin held the lead for several laps before damaging his trailing arm, which ended his day after just 5 laps, but Baron charged his way past Martin and #15 Ryan Piplic in lap three to take over the lead. Baron would hold the lead to the checkered flag to secure the win, which moves Baron within 4 points of the new points leader, Ryan Piplic.

FOX’s #15 Ryan Piplic and Walker Evan’s #400 RJ Anderson connected heading into turn one, which left Anderson with a broken A-Arm, which ended Anderson’s win streak at three races. Also, Piplic held on to secure the 2nd spot, which boosted Piplic into the SxS Production 1000 Class points lead by a slim margin of 3 points over RJ Anderson.

Black Rhino’s #1 Greg Row was the biggest surprise of the day as he finished in the 3rd spot, which blew away his previous best 9th place finish at Lake Havasu. Row was previously a dominate force in the Yamaha Rhino, so it appears he must have his new Polaris RZR XP 900 ride dialed in, so Row may be one to watch at the final two rounds of the 2012 WORCS racing season.

The battle for the win in the SxS Production 850 Class was intense between #2 David Lytle and #680 Nic Granlund, but in the end, it was Series points leader, Lytle, taking the win by a slim margin over Granlund. For Lytle , it was his second win of the season, and he has yet to finish outside the top three, which has allowed Lytle to extend his points lead to 20 points over #456 Aflredo Ramirez, who finished in third at Round 6.

The points battle in the SxS Production 700 class remains tight after six rounds of racing with the top four racers only separated by a slim margin of 10 points.   The new points leader, #816 Cody Rahders was up to challenge as he secured his second win of the season, which moved him into a tie in the points battle with 3rd place finisher #311 Michael Hinckley.

Check out www.atvriders.com for all your ATV & SxS Racing News.