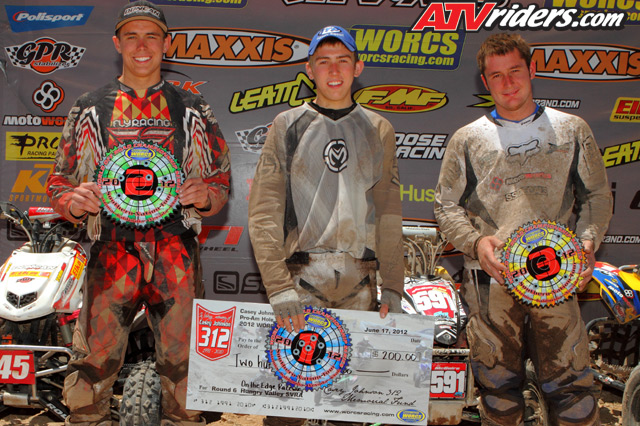 Enterprise, UT – On the Edge Raceway proved to be one of the most challenging courses of the 2012 WORCS Racing season with its abundance of rocks and water crossings that challenged the best of racers, and it was a the perfect track layout for the GNCC racer, #591 Pat McGuire to make his WORCS racing debut as he went on to win the Pro-Am race on Sunday with a fifth overall finish.   Joining, McGuire on the Podium were Duncan Racing’s #45 Garrin Fuller and Can-Am’s #1r Collins Webster.

Greg Cycle’s #591 Pat McGuire made his presence known on Saturday when he charged his way to the front of the pack to secure the Production A Class win, and he did exactly the same thing on Sunday during the Pro-Am Main event. McGuire grabbed the Holeshot, but he was quickly passed by Garrin Fuller on the MX track, but McGuire regained the lead in lap 3 with a class leading lap-time of 8:07.554, and he held the lead to the checkered flag for the Pro-Am Win.

Duncan Racing’s #45 Garrin Fuller put in an impressive first lap in the Pro-Am race, but he dropped back to second when McGuire made the pass for the lead, but Fuller maintained the second spot till the checkered flag to extend his Pro-Am Class points lead to 22 points over Can-Am’s Collins Webster. Fuller also claimed his fifth straight Open A Class win.

Can-Am’s #1r Collins Webster secured his fifth podium finish of the season at On the Edge Raceway, and he put in a late charge to close the gap on Fuller to within a minute as he claimed a third place finish. Webster finished second in the Production A Class, which currently has him leading the class points.

Senior 50 A Class racer, #21 Rick Ellsworth secured his 5th win of the year, and he once again qualified for the Pro-Am class, which he finished a season best 12th place.

In the youth ranks, Alex Ortiz, secured wins in both the 12-15 Production and Shifter Open Class.

#555y Amanda Stewart claimed her first win of the season in the 70 SS Sport Class, which extends her points lead to 20 points over #222y Missy Taylor.

Check out www.atvriders.com for all your ATV & SxS Racing News.