Posted on May 13, 2012 by Podium Promotions Leave a comment 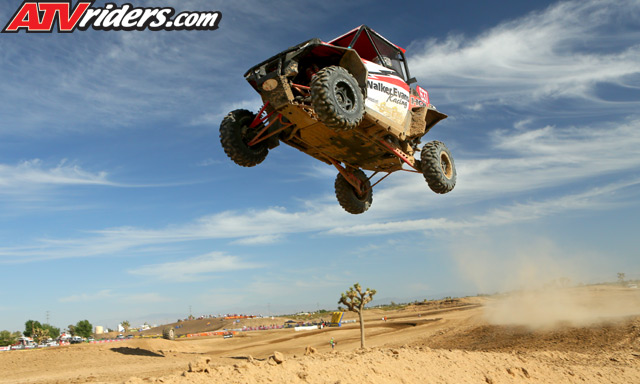 Adelanto, CA – Racetown 395 hosted round 5 of the 2012 WORCS Racing series, and nearly sixty SxS / UTV racers lined up to tackle technical motocross track and rough off-road section, and for the second straight race, Walker Evan Racing’s RJ Anderson was up to the challenge as he grabbed the Holeshot to take over the early lead.

Polaris’ #637 RJ Anderson was flying high as he was one of just a handful of SxS racers to launch the huge step-up table top jump, lap after lap. Anderson would lead the race from start to finish to claim the SxS Production 1000 class win and extend his points lead twelve over Maxxis #15 Ryan Piplic finishing in 4th place.

#3 Kayla Smith charged her way to the Production 700 SxS Class win and scored the fastest laptime of the class in the final lap as she closed the door on the competition.

Round 6 of the 2012 WORCS SxS Racing series is set for June 16th at a new location, On the Edge Raceway, in Southern Utah.

For all your SxS Racing News & Reviews, be sure to visit www.atvriders.com