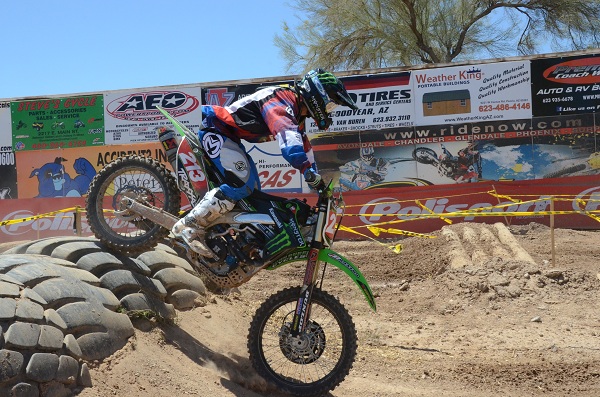 Monster Energy Kawasaki’s Justin Seeds took his first win of the season in the Pro 2 class with a stellar performance in the Arizona heat. Seeds was able to put in consistently fast lap times early in the race and maintained a strong pace even after he had gapped the large Pro 2 field. When the checkered flag came out after more than 1 ½ hours of racing in the 105-plus degree heat, Seeds was more than 2 ½ minutes ahead of second place.

“I’m glad to finally get back to the top of the podium,” said the defending Pro 2 Champion. “I struggled a bit earlier this season but it’s coming together now. It sure is a lot easier to win when you get a good start.”

The main challenger to Seeds was Corey Graffunder. The tall Canadian battled with Seeds for the first half of the race and cut the fastest lap time of the Pro 2 class with a 9:33 on the Husky. But Graffunder couldn’t maintain that kind of pace for long and had to settle for second when Seeds started to pull away.

“I felt really good today,” said Graffunder. “It was really hot out there, but I was ready for it. My Husky ran perfectly and I knew where I was faster on each technical section of the track. We picked up a lot of points today and I’m looking forward to finishing the season strong .”

Third place went to Zip-Ty’s Cooper Hall scoring his best finish of the season so far. Hall made his way to the podium with a solid pace and refusing to fade in the heat. Quick pit stops that included wetting down the rider also helped.

Fourth and fifth place went to the RMP/FMF/Maxxis, KTM teammates of Travis Coy and Ivan Ramirez.