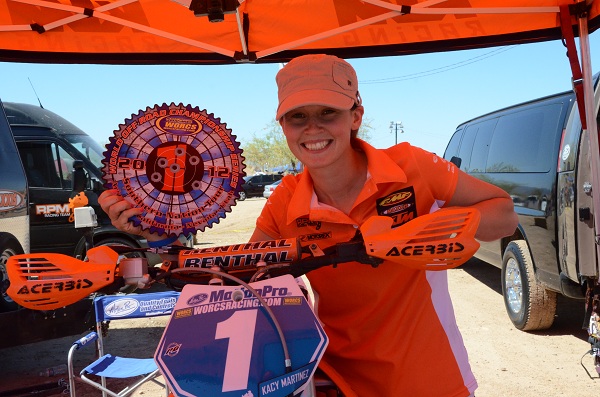 Defending 3-time WORCS Women Pro Champion Kacy Martinez scored her first victory of the season at round five in Speedworld Arizona. After gating well Martinez worked her way forward to lead early on and held off charges from Elizabeth Bash and Tatum Sik to take the win and extend her points lead towards a fourth title.

“Triple digit weather is what we were hearing coming into WORCS round five at Speedworld in Surprise, Arizona,” said Martinez. “I started drinking plenty of water early in the week to prepare for the hot weather and I believe it paid off. I threw on my Leatt cooling vest and Hydration system and headed to the line for my 3:40 start, which was around the hottest part of the day. I got off the line with a good start and was right behind Elizabeth Bash but before we headed out to the off road Section I was able to get around her. Tatum Sik and I swapped back and forth a couple times the first lap and I was able to make the last pass coming back onto the moto track. We headed through the Endurocross section where I made it through clean and came out with a pretty good gap on second place. From there I raced the course and made sure to make no mistakes and finally came through the checkered flag in first.”

Sik suffered in the heat but held on to take second ahead of Bash in third and Nicole Madsen in fourth.