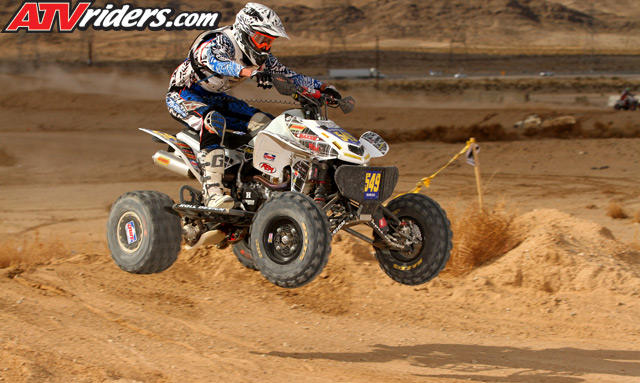 Primm, NV – After a wet and wild season opener at Glen Helen, the WORCS series headed to the dry and dusty Nevada desert for Round 2 at Buffalo Bill’s Casino, which worked in favor of Nevada’s own Motoworks / Can-Am’s Josh Frederick as he charged his way to the Pro ATV class win followed by Maxxis / H&M Motorsports’ Beau Baron and Yamaha’s Dustin Nelson.

Without the use of a starting gate, the Pro ATV race was a dead engine start, and DWT’s Dillon Zimmerman was up the challenge as grabbed the ATVriders.com Holeshot award followed by #549 Beau Baron. Unfortunately, Zimmerman’s charge for a podium finish would end when he experienced issues several laps into the race.

Within a few laps, Sparks Racing’s #422 David Haagsma charged his way past Baron and Zimmerman to take over the lead, which he held for several laps of the race before dropping back to a fourth place finish.

Just past the mid-way point in the race, Can-Am’s #2 Josh Frederick made his move on Haagsma to take over the lead, and Frederick’s quickly began to pull away from the rest of the pack as he went on to claim the win with over a minute to spare, which pulled Frederick into a points lead tie with 2nd place finisher Beau Baron.

Elka’s Beau Baron got off to a great start in the second spot, but as he pressured Zimmerman for the lead, Baron began to experience arm pump, which put a stop to his early charge. Baron would end up dropping back several positions before recovering in the final laps to charge his way back up into the second spot on the podium.

Yamaha’s Dustin Nelson started near the back of the pack after being distracted on the starting line with Justin Water’s jumping off his quad to make repairs just as the flag dropped for the start of the race. Nelson stayed on the gas and made an impressive charge through the pack to claim the final spot on the podium.

Be sure to check out www.atvriders.com for an in-depth Pro ATV Race Report.