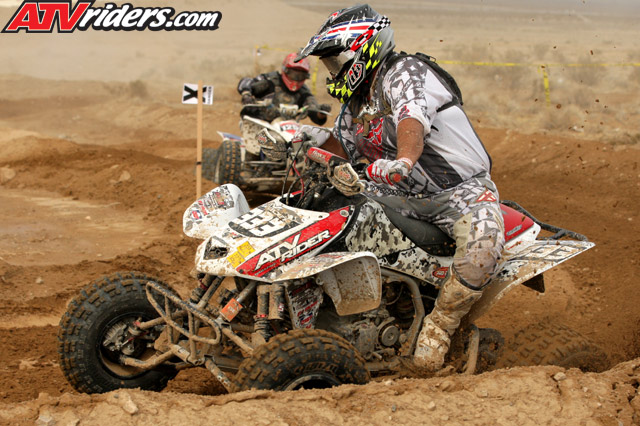 Primm, NV – Duncan Racing’s #45 Garrin Fuller ran away with Pro-Am ATV win at Round 2 of the 2012 WORCS Series after a mid-pack. Fuller was the only Pro-Am racer to finish on the lead lap with the top Pros, and he dedicated his win to Doug Eichner on the Podium.

Can-Am’s #1R Collins Webster secured his second straight Podium finish with a 2nd place finish at Buffalo Bill’s Casino. Webster ran most of the race in the third spot before catching a break in the final laps when #53 Mike Sloan experienced issues while holding the 2nd spot and dropped back to a 13th place finish, which allowed Webster to take over the second spot before the checkered flag.

#1a Cody Mitchell got off to a slow start in the 12th spot, but he stayed on the gas and charged his way up to a 3rd place finish by the checkered flag for a podium finish.

Las Vegas Resident, #303 Adrian Cash grabbed the 30+ B Class Holeshot and held on to secure the class win ahead of #531 Daniel McGrail.  Cash also secured a third place finish in the Production B Class to wrap-up a great weekend of racing.

ATV Rider Magazine Editor, #333 Eli Madero, scored the 30+ C Class win on his Honda TRX 450R, and he also finished 2nd in the Production C Class.  When Eli wasn’t on the track racing, he was helping with the Eichner family fundraiser, and a big thanks goes out to all those that participated in the silent auction, ATV raffle, or purchased a t-shirt.

Check out http://www.atvriders.com for more race reports from WORCS Round 2