Robert Takes WORCS Round One 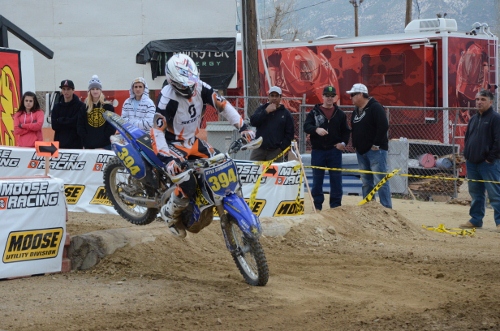 Monster energy Kawasaki’s Taylor Robert (33) put in two stellar rides over the opening weekend of the WORCS Pro Series to win the overall and begin the quest for his first WORCS Pro Championship. Robert won the opening race on Saturday and followed it up with a second place finish on Sunday to score the overall victory and sit at the top of the point’s battle.

“It’s a good way to start the season,” said Robert. “I’ve got to thank my team, my family, everybody that helped me prepare for 2012.  It’s going to be a long series and this is just the first one.”

Taking second was FMF/KTM’s Mike Brown (311) with a 2-3 performance. Brownie got the holeshot in Saturday’s race and led for a while before losing the battle with Robert for the race #1 win. Then he gated well again in race #2 on Sunday, but couldn’t reel in Robert or Kyle Summers and had to settle for third in race #2. But second overall is a good way to start the series.

“This is the best beginning I’ve ever had for a WORCs Series,” said Brown. “I’m happy to put KTM on the podium and I really like the new 450. We’re going to win a lot of races with it this year.”

Taking third overall was Kyle Summers (394), who put a Yamaha back on the WORCS podium for the first time in a long while. Summers was a WORCS regular not long ago, but missed most of last season. The fans and riders were all glad to see him return with a new team – Rockstar Valley Yamaha. Kyle scored a fifth place finish in race #1 and then impressed everyone by winning race #2 for third overall.

“I’m really happy to be back,” said Summers. “The last time I raced here I got carried off the track with some pretty bad injuries. We’ve only just put this team together at the last minute and I’m grateful to get to race again with WORCS. I just want to race and have fun doing it and winning is always fun.”