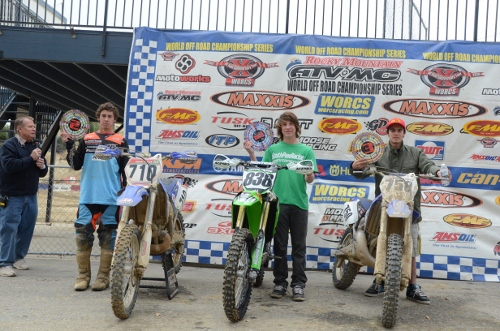 Brandon Leith (838) made the trip down from Eagle Mountain, Utah to take the season opener in the WORCS Series in the Pro 2 Lights class at Glen Helen this Sunday. Leith set the fastest lap time of all the Pro 2 Lites with a blistering 8:50 aboard his Kawasaki and won the 90 minute event by better than two minutes over second place.

“This is the best start I’ve ever had,” said Leith. “I won a WORCS race near the end of last season, but I couldn’t race the whole series. This year I hope to make it for every round and go for the Championship.”

Taking second was the defending Pro 2 Lites Champion Even Kelly (710). Kelly gated poorly and had to work his way through the pack to garner the second slot on the podium. “I really need to train,” said Kelly. “After winning the championship I took the next couple of months off and I’m feeling it now. I’m happy with second place today, but I need to train better for 90 minutes.”

Third place went to Ryan Sandoval with an impressive ride to garner the final slot on the boxes. “I just rode as hard as I could for as long as the race lasted,” said Sandoval. “It feels good to be on the podium and I plan to do it a lot more this season.”